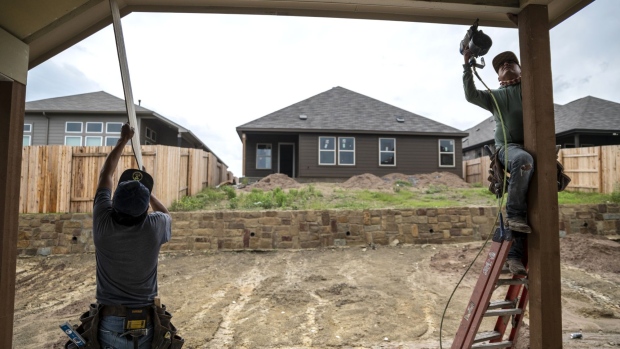 A contractor works on a house under construction at a KB Home development in Gibsonton, Florida, U.S., on Thursday, May 24, 2018. Home prices in 20 U.S. cities climbed more than forecast in March, driven by rising demand and a lack of inventory, according to S&P CoreLogic Case-Shiller data released Tuesday. , Bloomberg

(Bloomberg) -- Confidence among U.S. homebuilders declined in June to a 10-month low as elevated costs continued to dampen demand for new homes.

A gauge of builder sentiment fell to 81 this month from 83, National Association of Home Builders/Wells Fargo data showed Tuesday. The median forecast in a Bloomberg survey of economists called for no change from a month earlier.

The decline in sentiment indicates that continued elevated costs for some building materials and labor are keeping some buyers out of the once red-hot U.S. housing market. Despite the easing in confidence, the gauge remains well above pre-pandemic levels and has held within a narrow, three-point range this year.

“Higher costs and declining availability for softwood lumber and other building materials pushed down builder sentiment in June,” said Chuck Fowke, chairman of the NAHB and a builder in Tampa, Florida, said in a statement. “These higher costs have moved some new homes beyond the budget of prospective buyers, which has slowed the strong pace of home building.”

All three of the NAHB’s component indexes declined. The measures of current sales conditions and sales outlook also dropped to the lowest levels since August. The component measuring traffic of prospective buyers declined to a five-month low.

Confidence settled back in all four U.S. regions, including five-point drops in the West and Northeast.