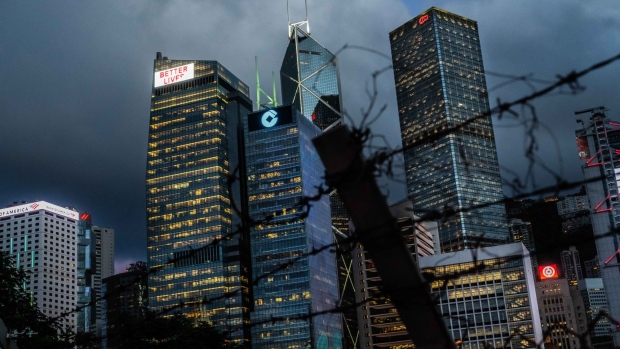 A barbed-wire fence stands near buildings illuminated at dusk in the Central district in Hong Kong, China, on Monday, June 22, 2020. The U.S. Senate approved a bipartisan measure on June 25 that would penalize banks doing business with Chinese officials involved in the national security law the country is seeking to impose on Hong Kong. Photographer: Billy H.C. Kwok/Bloomberg , Bloomberg

The bipartisan measure, which was passed by the U.S. Senate and still needs to go through the House and be signed by the U.S. President, bars financial institution from providing accounts to sanctioned officials, many of whom may be assumed to use the services of China’s biggest banks, Francis Chan, a senior analyst at BI in Hong Kong, said in a June 30 note. Banks in violation risk being cut off from accessing the U.S. financial system, he said.

Industrial & Commercial Bank of China Ltd., China Construction Bank Corp., Bank of China Ltd. and Agricultural Bank of China Ltd., the nation’s four largest state-backed lenders, had a combined 7.5 trillion yuan ($1.1 trillion) equivalent of U.S. dollar liabilities at the end of 2019, of which 47% were deposits, according to their annual reports. The rest came from the interbank borrowing and issuing securities to global investors.

The legislation would apply penalties against financial institutions only if a bank knowingly does business with an official under sanction. The bill is intended to keep the penalties from capturing a broad swath of U.S. companies, an administration official familiar with the discussions said earlier. Banks will be informed of what entities are on the sanctions list before penalties are imposed, the person said.

Global banks could also be at risk since Chinese officials, their relatives and associates may also be their customers, Chan said. Standard Chartered Plc paid more than $600 million in fines in 2019 for breaching sanctions against Burma, Cuba, Iran, Sudan and Syria. BNP Paribas SA was fined $8.9 billion by the U.S. in 2014, the largest ever on an individual bank, for transactions with Sudan and other blacklisted nations.

The Trump administration overnight escalated pressure on China over its crackdown on Hong Kong by making it harder to export sensitive technology to the city as Beijing is poised on Tuesday to pass the security law. The Commerce Department said it’s suspending regulations allowing special treatment to Hong Kong over things including export license exceptions.