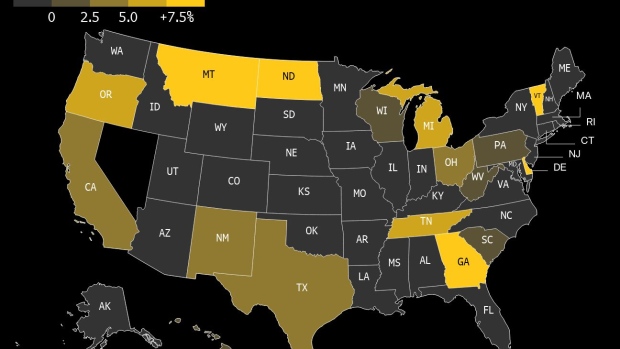 (Bloomberg) -- The U.S. hospital-staffing shortage exacerbated by the latest Covid-19 wave is showing signs of easing, but many West Coast and rural states are still seeing the worst of it.

Over the past seven days, about 16.7% of U.S. hospitals have reported critical staffing shortages, down from a recent peak of 18.7% on Jan. 9, according to data from the Department of Health and Human Services. Fewer facilities are reporting shortages in populous New York, Florida and Illinois.

The numbers are still concerning to state leaders, but are at least returning to the levels seen in October and November, before the omicron spike.

The omicron variant hit the U.S. in December with a surge in infections that dwarfed all previous waves. Now, the recent decline in cases in many areas has helped ease strain at a time when pandemic burnout, the winter holidays and even conflicts over vaccine mandates have made it hard to staff U.S. hospitals.

The average omicron infection has proved to be less severe and deadly than previous variants, thanks to inoculations and the variant itself, but it has produced so many cases that hospitalizations jumped anyway. Many health-care workers caught Covid-19 in their communities and had to miss work.

While staffing is improving in most states, the numbers of facilities facing shortages is still rising in 15 jurisdictions. In Montana, Vermont and North Dakota, the average number of facilities reporting shortages have jumped 38%, 25% and 14%, respectively, in the past week. On the West Coast, Oregon is up 6% and California has climbed 3%, the data show.

Notably, some of the worst-hit states are highly rural, and the distances between health-care facilities can make transferring patients or sharing resources more difficult.

Other states may have moved past the phase of emergency department pressure, but are now dealing with packed intensive-care units.