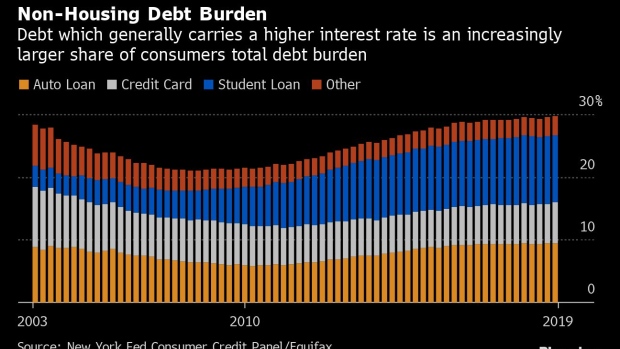 (Bloomberg) -- Americans increased their borrowing for the 22nd straight quarter as more households took out loans to buy homes or refinance existing mortgages, according to a report released today from the Federal Reserve Bank of New York.

Total U.S. household debt rose by $601 billion in the fourth quarter, or 1.4%, surpassing $14 trillion for the first time, the New York Fed’s quarterly household credit and debt report showed. That’s $1.5 trillion above the previous peak in the third quarter of 2008. Overall household debt is now 26.8% above the second-quarter 2013 trough.

“Mortgage originations, including refinances, increased significantly in the final quarter of 2019,” Wilbert Van Der Klaauw, vice president at the New York Fed, said in a statement.

Auto debt, which has risen for 35 consecutive quarters, increased $16 billion from the previous quarter. Almost 5% of auto loans are 90 days of more delinquent. This is the highest percentage since the third quarter of 2011.

Among student debt, one in nine borrowers were 90+ days delinquent or in default in 2019, and this figure may be understated. About half of student loans are currently in deferment, in grace periods or in forbearance and therefore temporarily not in the repayment cycle. Once these loans enter that cycle, delinquency rates are projected to be roughly twice as high, according to the Fed report.

To contact the editors responsible for this story: Sarah McGregor at smcgregor5@bloomberg.net, Anita Sharpe