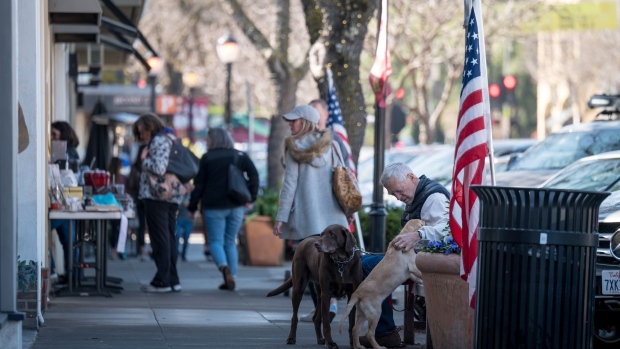 Pedestrians walk on Main Street in Los Altos, California, U.S., on Saturday, Feb. 8, 2020. The richest communities in the U.S. continue to get richer. This year, in order to make the top 100, a neighborhood needed an average household income of $220,000 -- up from $209,000 last year. Photographer: David Paul Morris/Bloomberg , Bloomberg

Americans cut back on credit cards and other types of consumer borrowing in the second quarter as the pandemic froze the economy, sending overall household debt down for the first time in six years even as mortgage loans continued to rise.

Total debt declined 0.2 per cent to US$14.27 trillion, from US$14.3 trillion in the first quarter, the U.S. Federal Reserve Bank of New York said in a report published Thursday. The decline was led by a drop in outstanding credit-card balances, which fell by US$76 billion as shutdowns limited consumer spending and households set aside more cash to clear their liabilities.

Meanwhile, mortgage borrowing rose by US$63 billion in the quarter to US$9.78 trillion. Almost 70 per cent of mortgage originations were among borrowers with a credit score of at least 760, the highest percentage since records started in 2003.

Record-low mortgage rates -- the average 30-year fixed-rate mortgage costs less than 2.9 per cent -- have prompted Americans with good credit to refinance and cut their borrowing costs. But that opportunity hasn’t been available to everyone. Mortgage credit availability is down more than 30 per cent from a year ago and near its lowest level since 2014, according to the Mortgage Bankers Association.

An unprecedented wave of one-time checks from Washington, extra unemployment benefits and generous loan forbearance programs from lenders across the country have combined to help Americans stay current. The serious delinquency rate on consumer debt fell by half between the end of March and the end of July, to 0.7 per cent, data from the credit bureau Equifax show.

About seven per cent of student debt was 90-plus days delinquent or in default in the second quarter compared with almost 11 per cent in the first quarter, the New York Fed report said.

“Protections afforded to American consumers through the CARES Act have prevented large scale delinquency,” said Joelle Scally, administrator of the Center for Microeconomic Data at the New York Fed. “However, these temporary relief measures may also mask the very real financial challenges that Americans may be experiencing.”

The six largest U.S. banks cut US$35 billion from their profits last quarter to brace for a wave of bad loans, but even they acknowledged that they don’t know how bad things are about to get.

“Right now we are seeing nothing that is consistent with an 11 per cent unemployment rate,” Bank of America Chief Executive Officer Brian Moynihan said on the bank’s earnings call last month.