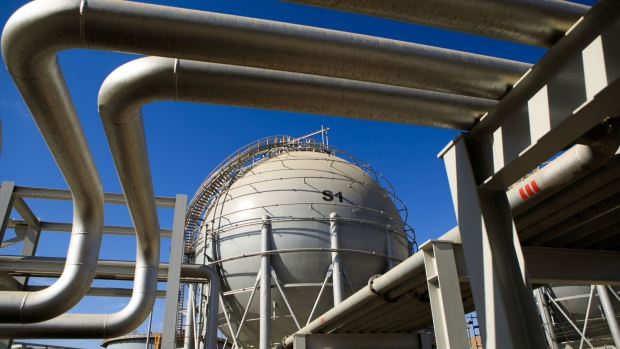 (Bloomberg) -- The European Union and the U.S. are working on an agreement that would aim to ensure a supply of American liquefied natural gas and hydrogen to EU member states as the bloc works toward ending its reliance on Russian energy.

Joe Biden and European Commission President Ursula von der Leyen could announce an agreement this week while the U.S. president is in Brussels meeting with NATO, Group of Seven and EU allies, according to a diplomatic correspondence seen by Bloomberg.

The agreement would seek to guarantee energy supplies to Europe over the next two years, according to an official familiar with the plans, who asked not to be identified because the talks are private.

It’s unlikely that the U.S. will guarantee specific amounts of supplies to the EU, according to the official. It’s unclear how the arrangement would work and whether it would include any agreement on pricing. As it stands, European buyers are competing with Asian countries for the world’s limited supply of LNG cargoes.

Russia is the EU’s biggest natural gas supplier, accounting for more than 40% of imports. The EU, which also relies on the country for the biggest share of its coal and oil import needs, is struggling to shift its energy policy away from Russia.

The European Commission on Wednesday adopted a draft regulation that requires countries to ensure that gas storages are filled up to 80% before next winter and 90% in the following years. The commission, the bloc’s executive arm, also called for joint purchases of gas by member states to help secure the best conditions.

The plan, which also involves an analysis of urgent tools to curb gas and power prices as well as a new state-aid framework to help companies hit by the economic effects of the war waged by Russian President Vladimir Putin, will be discussed by EU leaders when they meet in Brussels on March 24-25.