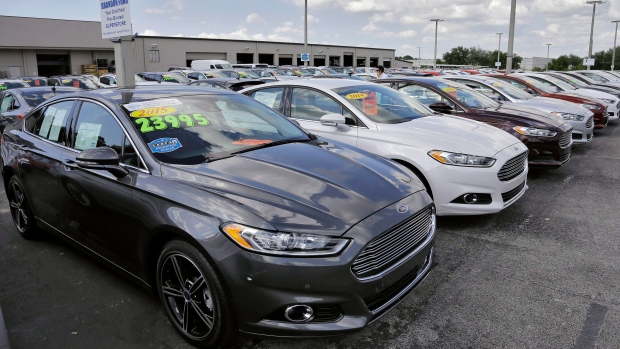 A car salesman works the telephone while searching through inventory at the certified used car lot at Brandon Ford in Brandon, Fla. on Tuesday, Nov. 3, 2015. , The Canadian Press

U.S. consumer prices rose in July by more than expected on a jump in auto and apparel costs, though inflation remained broadly muted as the pandemic suppressed demand.

The consumer price index rose 0.6 per cent from the prior month, following a 0.6 per cent gain in June, Labor Department figures showed Wednesday. The median forecast in a Bloomberg survey of economists called for a 0.3 per cent increase. Compared with a year earlier, the gauge increased 1 per cent, after June’s 0.6 per cent rise.

Excluding volatile food and fuel costs, the so-called core CPI -- viewed by policy makers as a more reliable gauge of price trends -- rose 0.6 per cent from the prior month, the biggest jump in almost three decades, after a 0.2 per cent increase in June. On an annual basis, core inflation measured 1.6 per cent, a four-month high, following 1.2 per cent in June.

Fixed-income measures of inflation expectations rose after the report. The 10-year breakeven rates, garnered by the gap between nominal and inflation-linked Treasury debt, rose to as high as 1.67 per cent from about 1.63 per cent earlier in the morning.

The gain in consumer prices reflects the rebound in demand for goods and services from the depths of the pandemic-induced lockdowns earlier this year, suggesting inflation is closer than thought to returning to the pre-crisis pace. Federal Reserve policy makers have seen little threat of inflation and expect to hold interest rates near zero for the foreseeable future, though investors in Treasuries have signaled they expect price gains to pick up amid extended monetary stimulus.

“You had significant contributions from categories that basically are just payback from previous drops. That’s not a sustained increase in inflation,” said Brett Ryan, senior U.S. economist at Deutsche Bank Securities Inc. “The bigger picture here is that you’re going to have a persistent output gap and elevated unemployment and that’s going to put downward pressure on wages.”

Prices for clothing rose 1.1 per cent after a 1.7 per cent jump in June, while used cars rose 2.3 per cent, the most since early 2010. New vehicles also increased 0.8 per cent, the biggest gain in nine years.

“Bloomberg Economics does not view the result as the leading edge of a new inflationary wave. The dynamic is similar to the initial rapid rebound in overall activity, with a full return to the pre-pandemic trend to prove incomplete.”

The cost of groceries fell 1.1% from the prior month, the first decline in almost a year and providing some relief to consumers who were facing more expensive food while sheltering at home.

Gasoline prices jumped 5.6% and accounted for about one quarter of the gain in the overall CPI. Still, pump prices were down 20.3% from July 2019.