Initial jobless claims in regular state programs fell by 99,000 -- the most in a month -- to 1.31 million in the week ended July 4, Labor Department data showed Thursday. That was a steeper drop than forecast in a Bloomberg survey of economists.

It’s still double the highest level during the last recession, and further declines are in question after states including Texas and Florida delayed or walked back reopening plans amid a surge in COVID-19 infections. 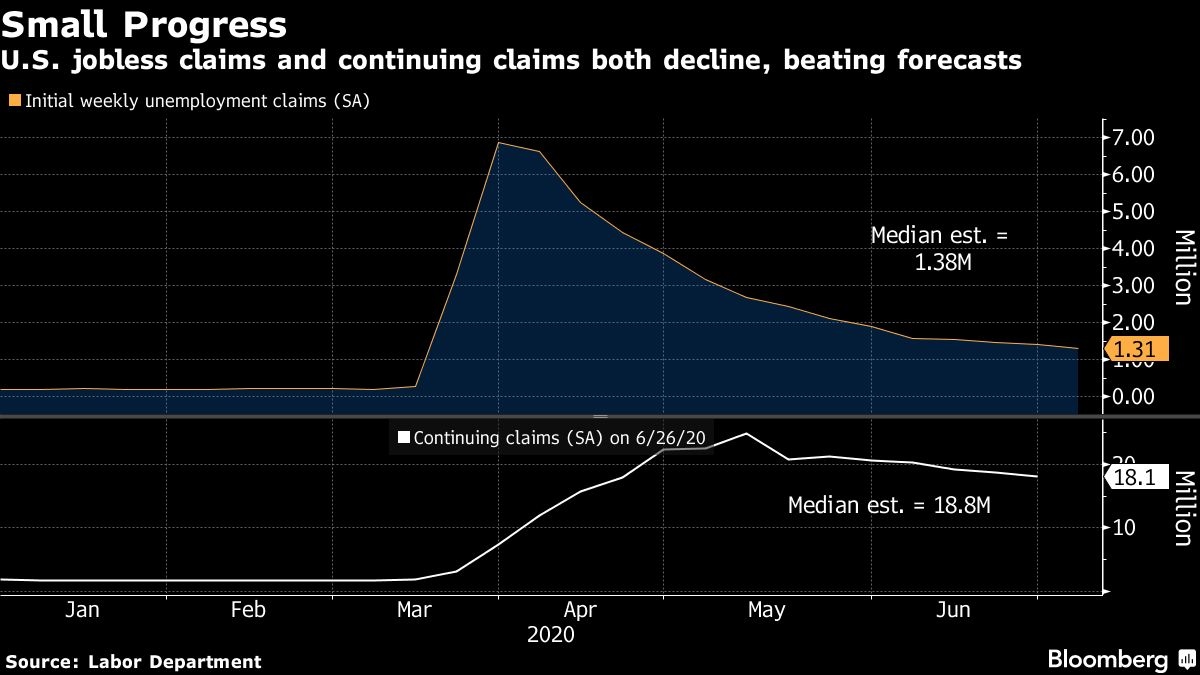 Meanwhile, companies are slashing expenses as they cope with demand that remains well below pre-pandemic levels. Wells Fargo & Co., the largest employer among U.S. banks, is preparing to cut thousands of jobs starting later this year, while United Airlines Holdings Inc. notified about half of its U.S. workforce -- some 36,000 employees -- that their jobs are at risk after federal payroll aid expires at the end of September.

Even with the less-downbeat data on jobless claims, stocks fell Thursday on concern that the resurgent coronavirus will derail the economic rebound. Bloomberg Economics projects payrolls will fall by 1 million in July after two months of record gains totaling 7.5 million.

“We’re penciling more significant secondary effects of the recession kicking in in the second half of the year,” said Ryan Sweet, head of monetary policy research at Moody’s Analytics, citing layoffs in the financial industry and potentially in airlines.

A separate report Thursday showed consumer confidence cooled for the first time in seven weeks amid the renewed outbreaks, raising prospects of a tempering in the economic recovery.

The jobs data showed continuing claims -- the total number of Americans claiming ongoing unemployment benefits in state programs -- declined to 18.1 million in the week ended June 27, compared with a median projection of 18.8 million.

The still-elevated level of initial and continuing claims “provides a cautionary message about the difficulties involved and the time it will take to heal a labor market thrown into turmoil by unprecedented circumstances,” Joshua Shapiro, chief U.S. economist at Maria Fiorini Ramirez, said in a note. “The road back to February’s peak employment levels will be a long and bumpy one.”

With the federal government paying an extra US$600 in weekly unemployment benefits through the end of July, employers may be allowing some people to go back and forth between working and filing for benefits, which is “wreaking havoc on the data,” said Stephen Stanley, chief economist at Amherst Pierpont Securities.

“I’m not really going to put a lot of weight on the claims numbers until after the US$600-a-week benefit boost expires,” Stanley said.

Economists’ estimates of initial claims ranged from 1.2 million to 1.9 million. The data can be volatile in weeks around a holiday, and July 4 was Independence Day in the U.S., with the holiday observed on Friday.

On an unadjusted basis, continuing claims for state programs decreased by about 631,000 to 16.8 million.

In the week ended July 4, states reported 1.04 million initial claims for Pandemic Unemployment Assistance, the federal program that extends unemployment benefits to those not typically eligible like the self-employed.

The total number of unadjusted continuing claims in all programs rose to 32.9 million in the week ended June 20, though this figure likely reflects an overcount of reported PUA continued claims -- in some cases reflecting the number of retroactive weeks claimed rather than individual people.