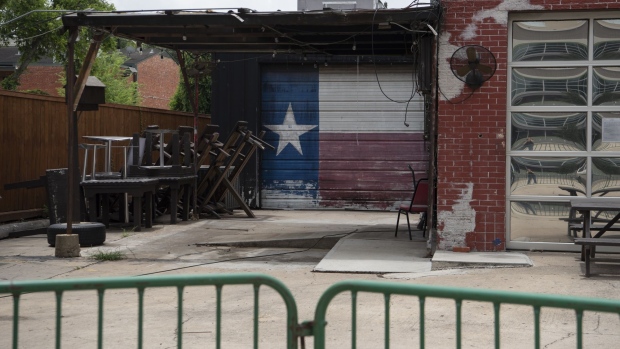 An empty patio is seen at a closed bar in Houston, Texas on June 27. Photographer: Callaghan O'Hare/Bloomberg , Bloomberg

The number of Americans filing for unemployment barely declined last week, signaling challenges to the economic recovery are multiplying.

Initial jobless claims in regular state programs totaled 1.3 million in the week ended July 11, down 10,000 from the prior period -- the smallest decline since March, Labor Department figures showed Thursday. 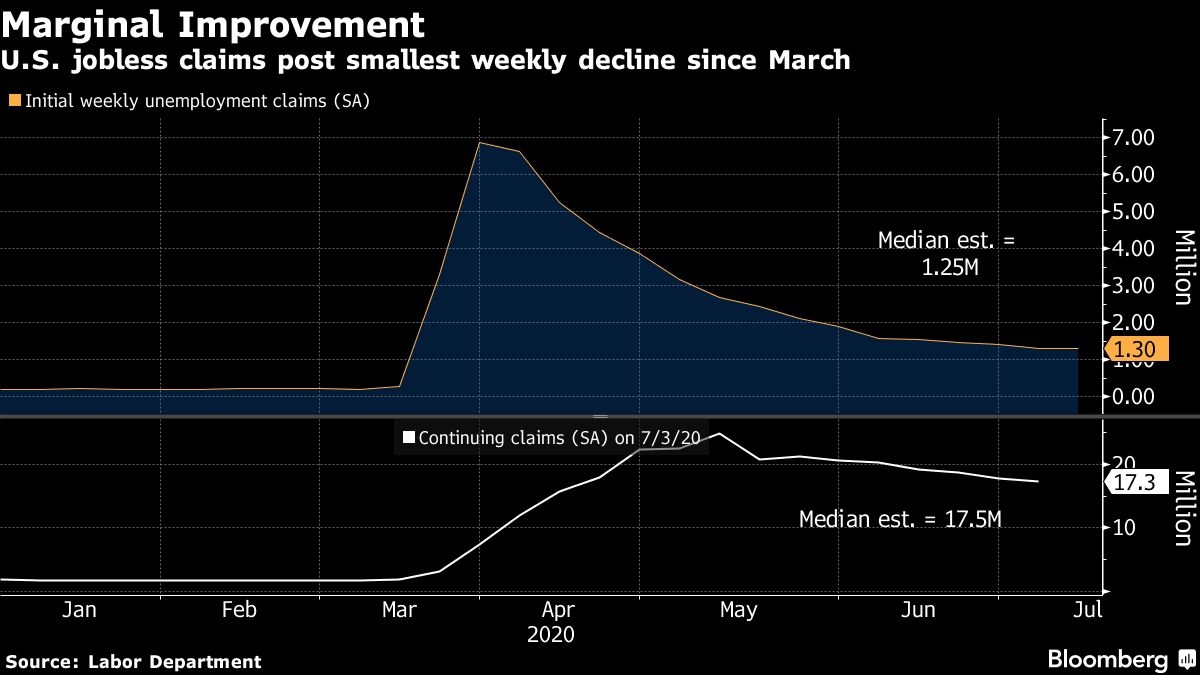 The figures add to signs that the labor-market recovery is stalling as coronavirus cases surge and reopenings pause or reverse across the country. Conditions are at risk of worsening with the potential expiration of supplemental federal jobless benefits, along with demand that continues to be depressed in a variety of sectors: American Airlines Group Inc. and United Airlines Holdings Inc., for instance, have indicated they could lay off tens of thousands later this year.

The claims numbers took some of the steam out of a separate report showing retail sales rose in June by more than forecast and reached pre-pandemic levels, underlining the importance of the federal stimulus set to run out this month. Jobless filings exceeded 1 million for a 17th straight week, compared with an average of just above 210,000 before the pandemic.

“The jobless claims data suggests that further gains from here will be much harder to achieve,” said Michael Gapen, chief U.S. economist at Barclays Plc. “The retail sales data tell us something about how households emerged from lockdown between mid-May and the end of June, but the jobless claims data are telling us something about their ability to carry that forward into July and August against a backdrop where it’s unclear whether additional federal benefits payments are forthcoming.”

“Jobless claims remained elevated as soaring virus cases pose a significant threat to the labor market recovery... The robust increase in retail sales in June, fueled by broad-based removal of lockdowns and following a sharp bounce in May, is a positive, yet likely temporary development.”

Without seasonal adjustments, initial claims rose by 108,800 to 1.5 million, the first increase since early April, though the rise followed a shortened holiday week. Of states that have seen recent increases in virus cases, California, Florida and Arizona all saw increases in initial claims on an unadjusted basis.

So far, 22 states have either reversed or paused reopenings, according to Bank of America Corp. economists, with California recently shutting indoor dining statewide along with other actions.

The weak outlooks were reflected in earnings calls and other comments from major banks this week. Bank of America Chief Executive Officer Brian Moynihan told analysts Thursday that “baseline projections now extend the length of the recessionary environment into 2022, deep into 2022.”

Still, there was other positive news on the economy Thursday. A measure of consumer sentiment rose to the highest since mid-April, while optimism among homebuilders jumped to pre-pandemic levels as mortgage rates fell to a record low.

Federal Reserve policy makers have sounded more cautious this week. Philadelphia Fed President Patrick Harker said in an interview Wednesday that his bank is revising its economic outlook in light of the virus surge and he’s a “little skeptical” July’s jobs gain will be as strong as the prior two months’.

The latest claims numbers are “disappointing to say the least,” said Joel Naroff of Naroff Economics LLC. “I would not be surprised if these numbers start rising.”

In the week ended July 11, states reported 928,488 initial claims for Pandemic Unemployment Assistance, the federal program that extends unemployment benefits to those not typically eligible like the self-employed. That’s down from 1.05 million the prior week.

The total number of unadjusted continuing claims in all programs fell by about 430,000 to 32 million in the week ended June 27, though this figure likely reflects an overcount of reported PUA continued claims -- in some cases reflecting the number of retroactive weeks claimed rather than individual people.