Applications for U.S. state unemployment benefits fell slightly last week, the latest sign that Americans are slowly, and in fits and starts, returning to work as the economy recovers.

Initial unemployment claims in regular state programs totaled 385,000 in the week ended July 31, down 14,000 from the prior week, Labor Department data showed Thursday. The figure was in line with the median estimate in a Bloomberg survey of economists, which called for 383,000 new applications. 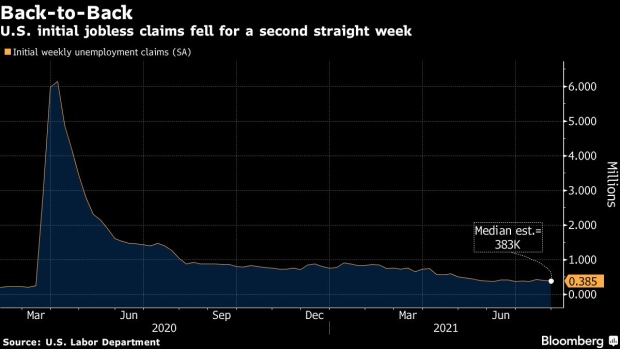 Over the past eight months, strengthening business conditions and fewer dismissals have fueled the downward trend in jobless claims. While economists generally expect unemployment applications to continue to ease in the months ahead, the rapidly spreading delta variant poses a risk to the pace of recovery.

Policy makers have begun introducing measures to curb the spread of the new COVID-19 variant and prevent another round of shutdowns.

New York City will require proof of vaccination for workers and customers at indoor restaurants, gyms and entertainment venues. Meanwhile, the Centers for Disease Control and Prevention updated its guidance on indoor masking to include K-12 classrooms and vaccinated people who live in virus hot spots.

U.S. equities rose after the market opened, and the 10-year Treasury yield was little changed.

Roughly half of U.S. governors have ended federal unemployment benefit programs created during the pandemic before their expiry in September, arguing the supplemental aid is making it harder for businesses to fill a record number of job openings. Lawsuits in some of those states challenging the governors’ legal authority to end the aid could restore the halted benefits until they officially expire.

Continuing claims for regular state programs fell by the most since November, in part reflecting people exhausting their eligibility and others finding employment.

The jobless claims data come ahead of Friday’s monthly jobs report from the Labor Department, which is forecast to show the U.S. labor market added 870,000 jobs in July.