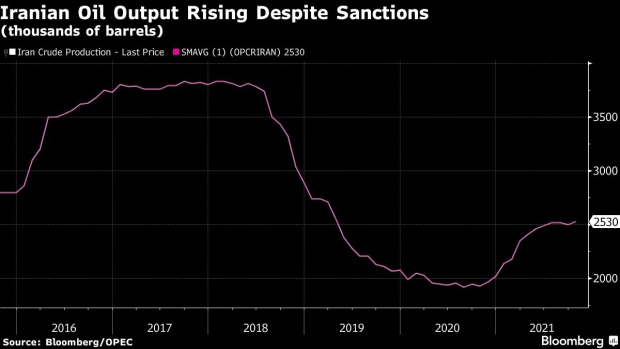 (Bloomberg) -- The U.S. and Iran will take part in a seventh round of indirect talks in Vienna on Monday, their latest attempt to revive the 2015 agreement that imposed limits on Tehran’s nuclear program in exchange for reduced sanctions.

The stakes are huge, with potential repercussions for global energy markets as well as the stability of the Middle East. It’s the first time the two sides are meeting -- from separate rooms with European and Russian intermediaries -- since Iran elected its new president, conservative cleric Ebrahim Raisi.

When President Joe Biden took office, energy markets and many political leaders thought a deal might come quickly. That hope has been dashed. With Iran having dramatically increased its stockpile of highly enriched nuclear fuel despite crushing sanctions, a bitter stalemate has become more entrenched.

Here’s what analysts steeped in the details -- and the geopolitics -- of the accord say:

Iranian officials want U.S. sanctions that were imposed after then-President Donald Trump quit the deal in 2018 wiped away. They are also demanding a U.S. guarantee that it won’t quit the deal -- known as the Joint Comprehensive Plan of Action -- again, even after Biden leaves office.

Iran “will come with their own approach, asking for more concessions while being willing to give in on fewer demands, and then it might take some time to disabuse them of that approach,” said Singh, who’s now managing director at the Washington Institute. “You could simply see the talks resume but never really drive toward a conclusion.”

As talks get underway again, Iran may see advancements in its nuclear program as a means of gaining leverage, said Foad Izadi, associate professor of world studies at the University of Tehran.

“That’s the language Washington understands,” Izadi said. And since the the country’s ruling elite has found a way to withstand existing sanctions and Covid-19, despite expectations to the contrary, that probably means “Iran will continue the current path of living under sanctions as they have for the last number of decades.”

Barbara Woodward, the U.K.’s ambassador to the United Nations, warned that as talks drag on, Iran’s advancements mean Tehran is getting ever closer to the capabilities needed to build nuclear weapons.

“Iran’s nuclear program has never been more advanced than it is today,” she told Bloomberg News. “The enrichment of uranium up to 60% is unprecedented in a non-nuclear weapons state and a key step in the development of a nuclear weapon. We are ready to return to negotiations in Vienna to swiftly conclude the deal on the table, which is fair and comprehensive. Iran should take the opportunity to conclude the JCPOA deal now.”

A breakthrough in Vienna “could mean an economic renaissance for Iran,” said Maciej Wojtal, London-based founder and chief investment officer of Amtelon Capital, which manages investments on the Tehran Stock Exchange. “Resumption of oil exports would bring at least $50 billion per year in hard currency revenues, which would solve the problem of budget and current account deficits. This would stabilize the exchange rate and reduce inflation.”

One reason Iran isn’t rushing toward a deal is that its illicit trade with China is going relatively well. Since 2020, Iran has doubled its crude exports to as much as 700,000 barrels per day, most of that to China, says Homayoun Falakshahi, a senior commodity analyst at Kpler, a commodities data and intelligence firm, and an expert on Iran oil trade.

“Much of that is taking place due to expectations that the Biden administration wouldn’t be as tough as Trump in looking at actual flows, actual tankers and looking at sanctioning those tankers,” he said. “The U.S. may be easing up on this both to help normalize the relationship with China as well as to help revive the JCPOA.”

If Washington really wants a deal, coordination with U.S. rivals China and Russia will be key. That means the U.S. will have to give the talks time, which could play to Iran’s advantage, said Ali Vaez, head of the Iran Project at the International Crisis Group.

“The clock is certainly ticking faster in Europe and in the U.S. than it is in Russia and China,” Vaez said. “And the reality is that whenever the U.S. decides to switch to ‘Plan B,’ the effectiveness of that Plan B will depend on whether it has the support of Russia and China.”

Another source of international pressure on Iran remains the Nuclear Non-Proliferation Treaty, the 1970 accord that requires countries to allow inspections of their nuclear stockpiles by the International Atomic Energy Agency.

Europe has an important role to play in the talks but if the past is any guidance, the European Union will be unable to assuage Iranian concerns about possible future U.S. violations of the deal, says Nathalie Tocci, a former special adviser to European Union chief envoy Josep Borrell.

“Unfortunately the past cannot be erased, and it’s a past that speaks of European weakness: Despite the best intentions, the EU was unable to live up to its own expectations and promises,” to help Iran after Trump pulled out of the accord, said Tocci, now director of the Rome-based Istituto Affari Internazionali.

Israel has repeatedly warned it could act militarily if talks don’t succeed.

“Israel cannot tolerate an Iran that has nuclear threshold capacity,” said Michael Oren, the country’s former ambassador to the U.S. and more recently a member of the Israeli parliament. “While the United States can, in theory, coexist with a threshold-capable Iran, Israel cannot.”

“Iran with a threshold capacity will impose a major check on our ability to defend ourselves against Hezbollah, Hamas and other Iranian proxies,” he said. “America has to be aware of the fact that these are our red lines and that our margin for error, our margin for compromise, is close to zero.”

“We put the odds at less than 30% that the US and Iran can finalize the terms of an agreement by mid-2022,” said JPMorgan Chase & Co. energy analysts including Natasha Kaneva. “Even then, we estimate that it will take Iran about two years to ramp up production back to pre-2018 levels. However, a prolonged delay or a full derailment of the talks appears very much a realistic scenario.”

Analysts at Goldman Sachs Group Inc., including Damien Courvalin, are less bearish, saying sanctions could be lifted by April. But Goldman’s analysts acknowledge there are “clear risks” to their assumptions about the path ahead and that their assessment “could prove too optimistic.”

“We’re screwed on Iran,” Ian Bremmer, the founder and president of the Eurasia Group, said this month during the Bloomberg New Economy Forum. “Biden wants to come back in. We can’t get it done. And as a consequence Iran is becoming a threshold nuclear state.”