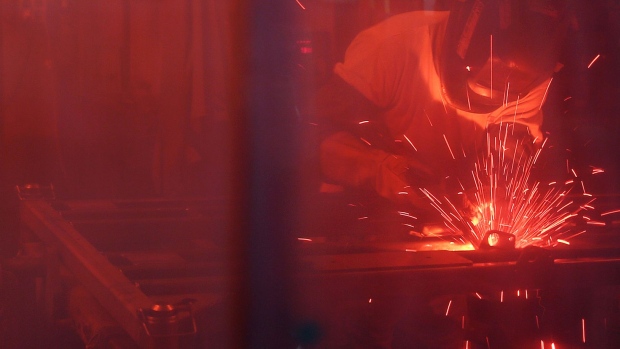 (Bloomberg) -- U.S. manufacturing expanded in July at the fastest pace since March 2019 as more factories boosted production in the face of firmer orders and lean inventories.

The Institute for Supply Management said Monday that its manufacturing gauge increased to 54.2 last month from 52.6. Readings above 50 indicate expansion, and the latest figure exceeded the 53.6 median projection in a Bloomberg survey of economists.

The data point to a steadier environment for producers, months after demand plummeted during the pandemic-related lockdown of the economy. Nonetheless, the pace of improvement risks moderating as the coronavirus stands in the way of a sustained quickening of demand.

Because the ISM’s report is based on a survey of purchasing managers and asks whether activity is increasing, decreasing or stagnant, the figures can be prone to big swings during turning points in the economy. The industry still faces a myriad of challenges that include high unemployment nationwide, a recent pickup in coronavirus cases, cutbacks in business investment and tenuous global demand.

The ISM’s measure of production increased in July to 62.1, the highest level since August 2018, and a gauge of orders climbed to 61.5, which was the strongest since September of that year. Output is strengthening because virus-induced shutdowns of factories, including the nation’s automakers, forced retailers and other end-users to rely on inventory to meet demand.

The group’s index of customer inventories fell to 41.6 in July, the lowest this year and showing that stockpiles were shrinking at a faster pace. Factory inventories also declined after barely growing a month earlier.

The improvements in orders and output still aren’t generating much hiring, however, as manufacturers remain cautious about the sustainability of demand. While in line with its pre-pandemic level, the ISM’s factory employment gauge still shows payrolls are declining, albeit at a slower pace.