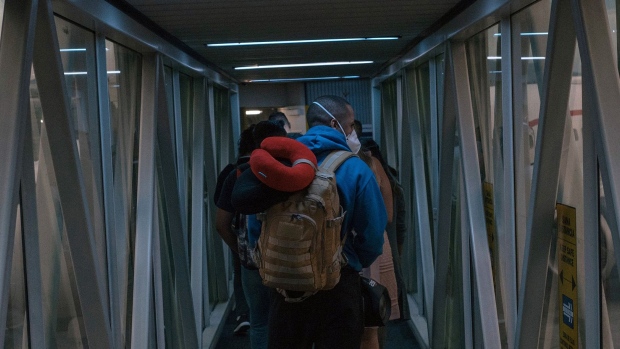 The Biden administration issued new rules for travelers to the U.S. on Monday requiring proof of full vaccination against COVID-19 in addition to a recent negative test for the virus.

People from countries with low supplies of vaccines who aren’t traveling on tourist visas, and those under 18, will be exempt from the vaccine requirement, senior administration officials said in a briefing for reporters.

U.S. citizens and residents returning from abroad who aren’t vaccinated will have to obtain a negative COVID-19 test within a day of their flight, the officials said.

The new rules taking effect Nov. 8 represent the biggest change to U.S. travel policy since the start of the pandemic. The procedures replace a system that flatly barred most foreign nationals coming directly from major markets including Europe, India, Brazil and China.

Under the new system, vaccinated people who have had a negative test in the prior 72 hours will be able to board a flight to the U.S. as long as they share contact tracing information. Unvaccinated foreigners will be generally barred from entry.

A notable exception is for people from a list of countries that are considered to have insufficient supplies of shots. If they aren’t traveling to the U.S. on a tourist visa, they’ll be admitted with proof of a negative COVID-19 test within one day of their flights.

The officials said that about 50 countries are on the list.

The U.S. will consider people arriving by plane vaccinated if they received shots that are either authorized by the Food and Drug Administration or have an Emergency Use listing from the World Health Organization.

Airlines, battered by the coronavirus crisis, have applauded the move. Flights between the U.S. and Europe - filled with premium travelers - make up the single most profitable part of the global aviation market.

The move to a vaccine-based entry system brings the U.S. into line with the European Union, which started using COVID-19 passport apps at the beginning of the summer, and the U.K., which made the switch in recent weeks. Asian nations such as Singapore, which have generally kept tighter curbs in place, have also started to loosen travel rules.