The U.S. and Japan are still thrashing out details of a trade deal that President Donald Trump wants to sign this month, including the crucial issue of whether he’ll refrain from imposing higher tariffs on imported cars, according to people familiar with the matter.

Trump, at the Group of Seven meeting in France last month, celebrated what he called a “major deal” that he and Prime Minister Shinzo Abe would sign on the sidelines of the United Nations General Assembly, starting later this month in New York.

But people familiar with the talks said the leaders only agreed on the broad strokes of a trade deal. Negotiators are now finalizing many of the core elements, including how much Japan is willing to open its agriculture market to U.S. imports, cuts to industrial tariffs, and the treatment of digital trade that could impact U.S. technology giants like Amazon.com Inc. and Alphabet Inc.’s Google.

Several people involved in and close to the U.S.-Japan trade talks said that given the tight timeline, it will be challenging to conclude a deal within the next couple of weeks before the UN gathering. 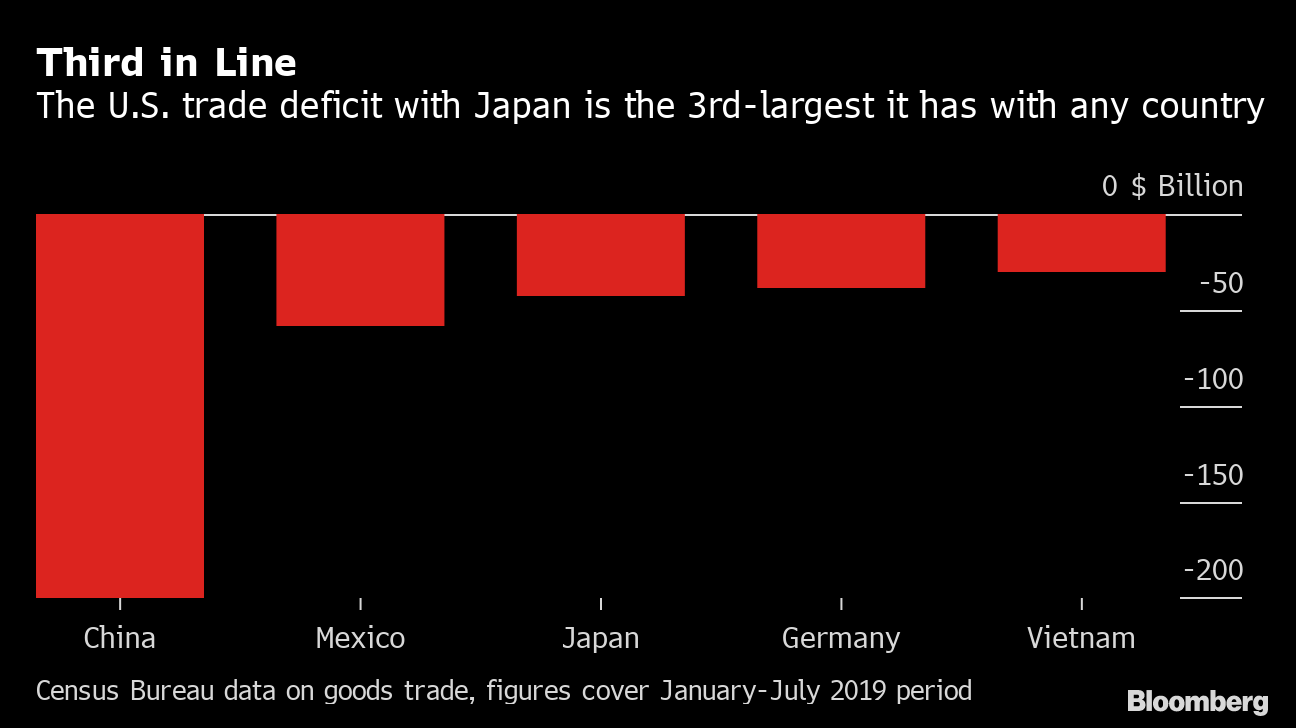 Japanese officials were caught by surprise when Trump called a news conference at the G-7 to announce a deal in principle, people close to the talks said. It moved so quickly that the Japanese government didn’t have time to invite journalists to attend the briefing.

The announcement even came before a firm agreement on the most contentious issue on the bargaining table, the people said. While Trump told reporters that the U.S. wouldn’t impose new tariffs on autos and auto parts imported from Japan “at this moment,” the president wasn’t clear if he’d agreed to that as a concession. And Trump kept the tariff threat alive by saying he could still impose the levies at a later date. Protection from the threat of auto tariffs is a central demand from Japan.

Trump earlier this year delayed a decision until November over whether to impose new levies on imported vehicles on national security grounds to allow more time for talks with Japan and the European Union.

A spokesman from the U.S. Trade Representative’s Office didn’t respond to a request for comment.

Some people on the U.S. side have voiced optimism on reaching a speedy agreement because it would benefit American farmers -- a core constituency for Trump who’ve been among the worst hit from his escalating trade war with China. Japanese officials view the conclusion of the pact as the end of a volatile period between the two countries that was dominated by trade frictions, they said.

Trade officials and lawyers are now working via video-conference to hammer out the final details, translation and legal wording. A meeting between the countries’ top trade negotiators probably won’t be needed, the people said.

According to people involved in the talks, it’s likely that a decision on Trump’s threatened auto tariffs will be left for the leaders to negotiate.

One official said the matter will potentially be dealt with in a separate document, outside the trade text.

Japan would prefer to have a legally binding agreement, people familiar with the matter said. They cited as a concern Trump’s threat earlier this year to impose a 5% duty on all goods coming from Mexico over illegal immigration concerns -- shortly after agreeing to the USMCA trade deal with that country and Canada. The ultimately struck a deal and Trump called off those tariffs.

Failure to shield Japan’s auto industry from damaging tariffs would be an embarrassment for Abe, who has tried to build a personal relationship with Trump.

Another possibly contentious area is what tariffs will be reduced under the new deal. Japan wants the U.S. to cut or eliminate existing tariffs on certain auto parts. U.S. Trade Representative Robert Lighthizer at last month’s G-7 meeting bristled at such calls.

Lighthizer’s counterpart Toshimitsu Motegi appeared at a meeting of a ruling Liberal Democratic Party trade committee Sept. 3, but made no substantive comment on the content of the negotiations. Media reports say Abe may switch Motegi to the foreign minister position in a cabinet reshuffle next week.

Officials say both sides are trying to be creative to make it a balanced agreement. Some people close to the talks say one option would be for the U.S. to cut levies on industrial parts that are not exclusive to the auto sector but can also be used in other applications, for example farm machinery.

After securing an initial limited agreement, the sides had planned to move to the next phase of the talks to secure a more comprehensive deal. However, people involved in the negotiations cast doubt on the likelihood that the second stage of negotiations would begin in the near future.