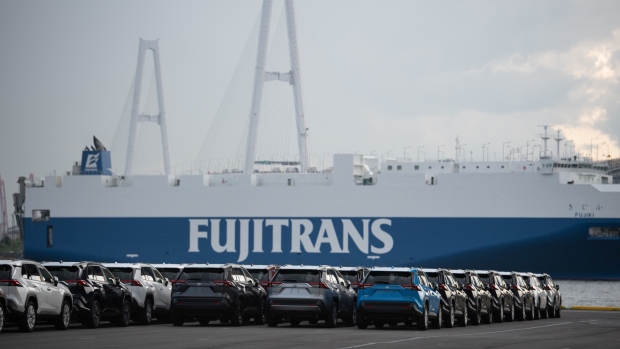 Toyota Motor Corp. Rush vehicles bound for shipment sit at the Nagoya Port in Tokai, Aichi Prefecture, Japan, on Wednesday, June 12, 2019. Toyota brought forward an electrified-vehicle sales target by five years as demand picks up. The company expects to have annual sales of 5.5 million of such vehicles globally in 2025, compared with a previous target of 2030. , Bloomberg

With Japanese Prime Minister Shinzo Abe’s coalition on track to win a clear majority in the upper house Sunday, attention is likely to turn swiftly back to his policy agenda. And U.S. President Donald Trump may push trade up Abe’s priority list.

The pace of talks is expected to pick up rapidly in the coming weeks—and it could get a little messy. Trump has so far protected Japan from his threat of auto tariffs. But the U.S. president will want to see progress on a trade deal that addresses the U.S.’s almost $70 billion trade deficit with Japan and will require some concessions on farming, which is a sensitive area for Tokyo.

So far, it’s not clear what, if anything, the U.S. is willing to give Japan in return. Negotiations on the working level have been taking place weekly for more than a month and are resuming in Washington on Wednesday, according to a person familiar with the planning.

Japan is still developing its wish list and asking the Trump administration to lower or eliminate tariffs on a range of products, including auto parts and other industrial goods.

Japan’s Economy Minister Toshimitsu Motegi is expected to travel to Washington several times next month for negotiations with U.S. Trade Representative Robert Lighthizer, a person familiar with the plans said. Officials in both countries want to announce some sort of agreement when Trump and Abe meet at the UN General Assembly in September. But that’s an ambitious goal that will be hard to meet, a Japanese official said.

If talks aren’t moving fast enough, Trump might pull a familiar move: repeating his threat for duties on Japanese auto imports and opening another global front in his trade battle.

Singapore’s exports plunged in June amid a collapse in technology-related shipments, according to data from Enterprise Singapore. Overall exports have been weakening since last year as a technology boom waned, but the outlook worsened considerably in 2019 amid a U.S.-China trade war.

To contact the author of this story: Jenny Leonard in Washington at jleonard67@bloomberg.net

To contact the editor responsible for this story: Brendan Murray at brmurray@bloomberg.net, Sarah McGregorZoe Schneeweiss