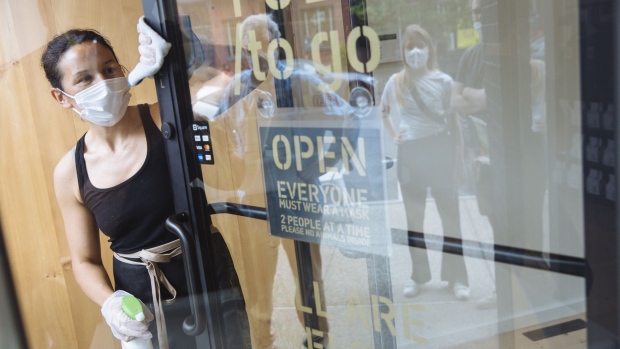 People wearing protective masks are reflected in the window as a worker disinfects the door to prevent the spread of Covid-19 in Hudson, New York, U.S., on Sunday, June 28, 2020. As part of the phase 3 of reopening, the city of Hudson has implemented a "Shared Summer Streets" program that will allow businesses and pedestrians the space needed to operate with social distancing. , Bloomberg

U.S. job gains are set to slow sharply or even reverse in July after a resurgent coronavirus and new wave of shutdowns stymied the economic rebound.

California on Monday ordered all inside dining and other indoor entertainment closed in the most populous U.S. state, while shutting down business more broadly in harder-hit counties. Washington Governor Jay Inslee on Tuesday paused any relaxation of restrictions in the state for two weeks. Jobs-website Glassdoor Inc. said openings across the U.S. had dropped 5.5 over the past two weeks, with declines in all 50 states. 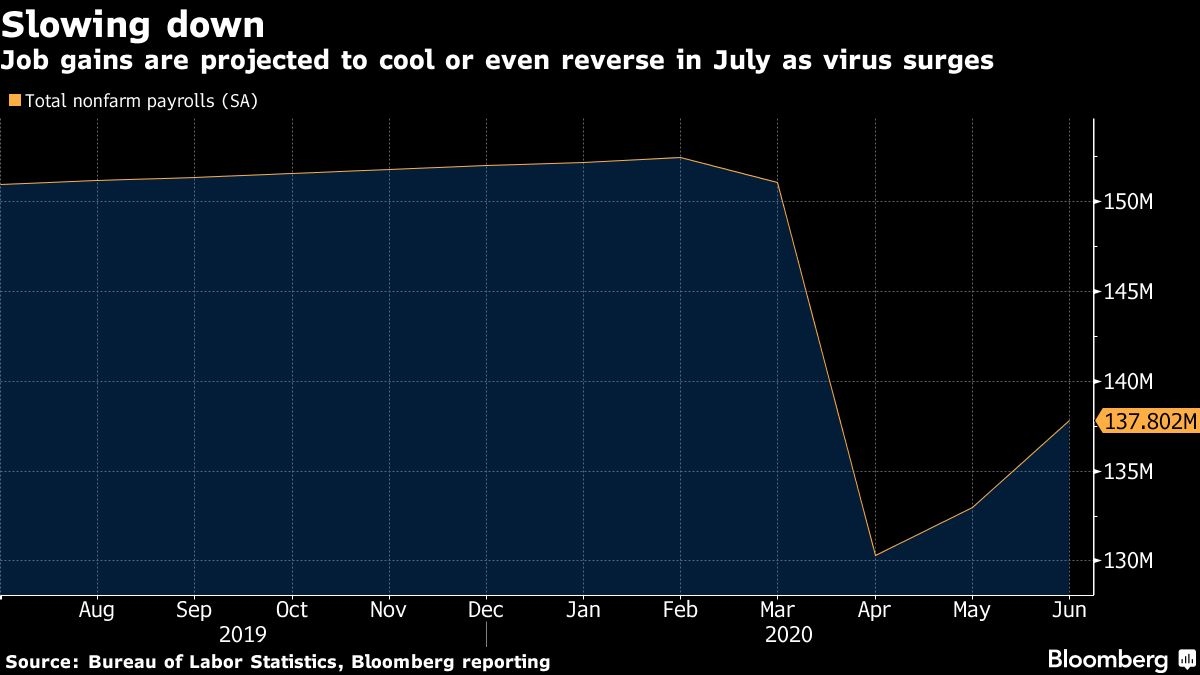 The July unemployment rate will be based on whether respondents have a job this week, while payroll counts are based on the pay period -- mostly weekly or biweekly -- that includes the 12th of the month. That means any layoffs or stalled rehiring related to the latest shutdowns will potentially be a factor in the July jobs report due Aug. 7, though several analysts expect a greater impact in August’s or September’s figures, given that there was probably more rehiring before this week.

Coming on the heels of a combined gain of 7.5 million jobs in May and June, the trends spell a slowdown or halt to the labor-market rebound that U.S. President Donald Trump is counting on to revive his re-election chances. The latest job losses will hit Americans harder should lawmakers fail to agree on how to extend the US$600 extra weekly federal payments beyond this month.

Morgan Stanley said last week it sees a “meaningful chance” of a drop in July payrolls based on current trends, while Mark Zandi of Moody’s Analytics is forecasting a gain of less than one million, even with a possible 200,000 boost from temporary census jobs. Other economists said they’re expecting significantly fewer job gains than June’s 4.8 million, with payrolls still about 15 million below February’s level.

“We could see some preliminary impacts” from new shutdowns in the July figures, said Yelena Shulyatyeva of Bloomberg Economics, who was already projecting a decline of one million jobs. “My concern is what will happen going forward into the end of the year, into 2021. Will there be enough jobs to create enough personal income so that it can support personal spending growth?”

For the weekly jobless claims report due Thursday, economists are expecting an even slower decline in initial applications for benefits, with continuing claims projected to remain very elevated.

“The developments since the June report have obviously not been very encouraging,” said Russell Price, senior economist at Ameriprise Financial. Leisure and hospitality jobs, which were initially rebounding well after collapsing at the pandemic’s outset, will in particular see their recovery further delayed, Price said.

With 22 states pausing or reversing reopenings, according to Bank of America Corp. economists, Federal Reserve policy makers sounded notes of caution this week. Philadelphia Fed President Patrick Harker said in an interview Wednesday that his bank is revising its economic outlook in light of the virus surge and he’s a “little skeptical” July’s jobs gain will be as strong as the prior two months’.

Fed Governor Lael Brainard said in a speech Tuesday that high-frequency labor indicators, including mobility data and small-business employment, “suggest that the strong pace of improvement in May and the first half of June may not be sustained.”

Stock investors have paid little heed to the signs of a weakening recovery. The S&P 500 opened higher on Wednesday on signs that scientists are making progress in developing a vaccine for coronavirus, after jumping Tuesday to a five-week high.

Looking beyond July, there’s little sign the U.S. economy will return to normal any time soon. School reopenings are in question and the autumn college football season appears at risk, while large gatherings are being canceled and made into virtual conferences well into 2021. Philadelphia canceled all large public events through February.

Delta Air Lines Inc. said Tuesday the virus resurgence and related travel restrictions have stalled a fledgling recovery in U.S. travel demand and prompted it to slash the number of flights it had hoped to return to its schedule next month. Wells Fargo & Co. -- the biggest employer among U.S. banks, with 266,000 workers -- is planning thousands of job cuts to start in 2020, Bloomberg reported last week.

With reopenings slowing, economic growth may be less impressive following what’s forecast to be a record contraction in the April-June period. Economists surveyed by Bloomberg this month were projecting 18 per cent annualized expansion in gross domestic product for the third quarter, down from 19.8 per cent seen in June.

Morgan Stanley economist Robert Rosener said parts of the country with rising virus cases are seeing signs of an uptick in layoffs, though the firm still expects the economy will recover over the next 18 months.

“We will see volatility in the data along the way,” Rosener said. “In this case, we do think we might see some of that volatility showing up near-term on the labor market front.”

--With assistance from Catarina Saraiva, Alister Bull and Michael McKee.