Payrolls rose 266,000 from a month earlier, according to a Labor Department report Friday that represented one of the largest downside misses on record. Economists in a Bloomberg survey projected a 1 million hiring surge in April.

The unemployment rate edged up to 6.1 per cent, though the labor-force participation rate also increased. 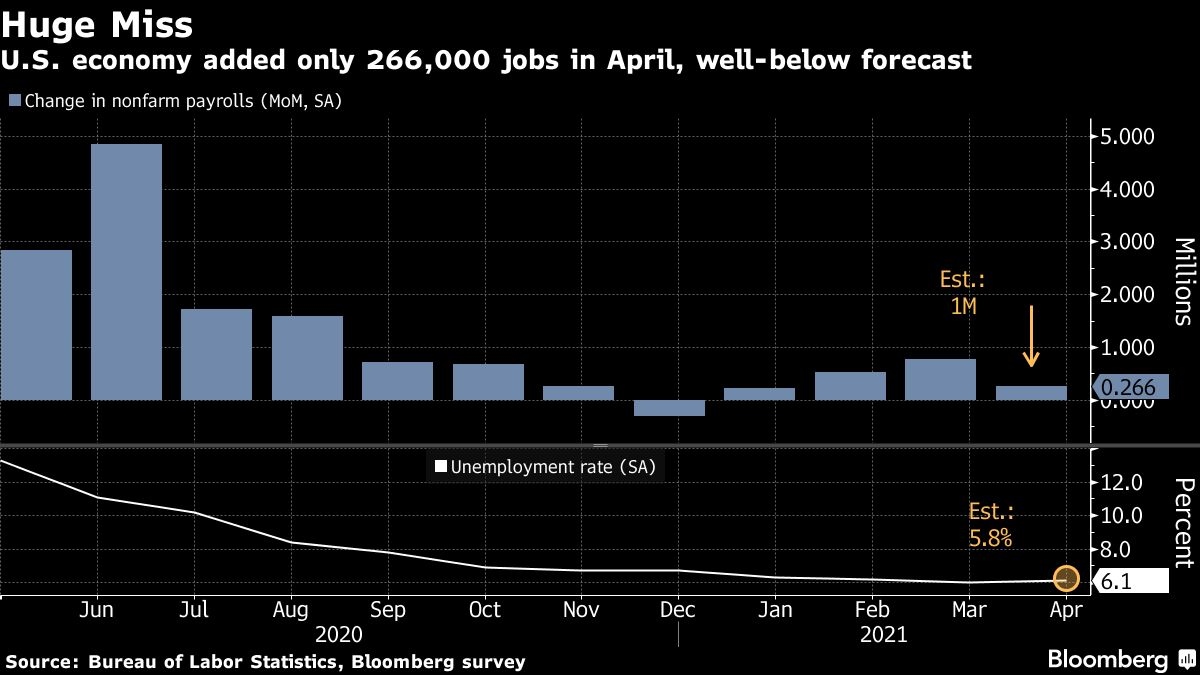 The report stunned investors as Treasury yields plunged and the dollar turned sharply lower. U.S. stocks rose on expectations that monetary policy will remain conducive to economic growth for a sustained period. The eurodollar market pushed back its pricing for a Federal Reserve rate increase to mid-2023.

The disappointing payrolls print leaves overall employment more than 8 million short of its pre-pandemic level and is consistent with recent comments from company officials highlighting challenges in filling open positions.

“It’s a lot faster to lay off workers than it is to hire them back,” said Sarah House, senior economist at Wells Fargo & Co. “While we are seeing some workers come back into the labor force it just isn’t fast enough.”

While job gains accelerated in leisure and hospitality, employment at temporary-help agencies and transportation and warehousing declined sharply.

Massive fiscal stimulus including the latest US$1.9 trillion package passed by President Joe Biden in March may also be impacting the pace of job growth. Some firms indicate enhanced unemployment benefits and the latest round of pandemic-relief checks are discouraging a return to work even as job openings approach a record.

In an interview with Bloomberg Television, Minneapolis Fed President Neel Kashkari said the data justified why the Fed is continuing to deliver its own stimulus. “Today’s jobs report is just an example of we have a long way to go and let’s not prematurely declare victory,” he said.

On an unadjusted basis, payrolls rose by more than 1 million last month. Seasonal adjustments usually call for a large hiring gain in April, which may in part explain why the headline number fell short of forecasts.

Another reason for the more moderate employment gain is problems in the nation’s supply chains. For instance, motor vehicle production has been severely hampered by shortages of semiconductors. The jobs report showed manufacturing payrolls declined 18,000 in April, driven by a sharp fall in jobs at automakers.

Average hourly earnings rose 0.7 per cent in April from a month earlier, to US$30.17, the jobs report showed. The wage data for April suggest that the rising demand for labor associated with the recovery from the pandemic may have put upward pressure on wages, the Labor Department said in a statement.

A separate measure of compensation that isn’t subjected to shifts in industry employment -- the employment cost index -- rose 0.9 per cent in the first quarter. That was the largest quarterly gain since 2007, according to the Labor Department’s data last week.

“While the jobs numbers themselves were certainly disappointing, I think there are a few nuggets in here that are positive development,” House said.

Labor force participation, a measure of the percentage of Americans either working or looking for work, rose to 61.7 per cent in April from 61.5 per cent, likely supported by increased vaccinations that helped fuel the reopenings of many retail establishments, restaurants and leisure-facing businesses.

Average weekly hours increased to match the highest in records dating back to 2006. The gain in the workweek, increased pay and the improvement in hiring helped boost aggregate weekly payrolls 1.2 per cent in April after a 1.3 per cent gain a month earlier.