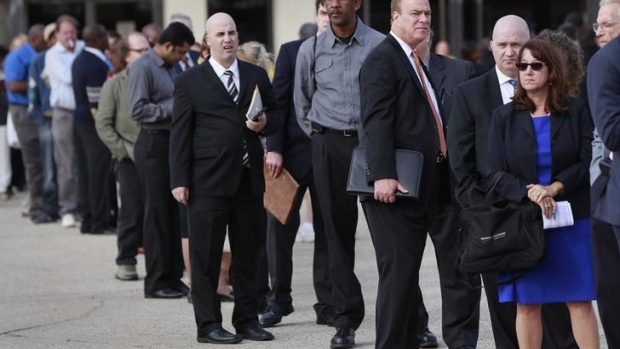 U.S. employers hired workers at a robust pace in February, beating expectations, and wages grinded higher, which could give the Federal Reserve the green light to raise interest rates next week despite slowing economic growth.

Nonfarm payrolls increased by 235,000 jobs last month as the construction sector recorded its largest gain in nearly 10 years due to unseasonably warm weather, the Labor Department said on Friday. February's employment gains were revised up to 238,000 from the previously reported 227,000.

"The report seals the deal for a rate hike next week. The labour market is where the Fed wants it to be," said Gus Faucher, deputy chief economist at PNC Financial in Pittsburgh.

Last month's brisk clip of hiring was accompanied by steady wage growth, with average hourly earnings rising 6 cents, or 0.2 per cent. January's wage growth was revised up to 0.2 per cent from the previous 0.1 per cent gain. That lifted the year-on-year increase in wages to 2.8 per cent from 2.6 per cent in January.

The unemployment rate fell one-tenth of a per centage point to 4.7 per cent, even as more people rushed into the labour market, encouraged by the hiring spree. Economists had forecast employment increasing by 190,000 jobs last month.

The dollar fell against a basket of currencies amid disappointment that wages were only growing gradually. The greenback was also hurt by news that the European Central Bank had discussed the possibility of raising interest rates before the end of its quantitative easing program.

Prices for U.S. government bonds rose, with the yield on the benchmark 10-year Treasury note retreating from a 12-week high.

With the labour market near full employment, wage growth could speed up as companies are forced to raise compensation to retain employees and attract skilled workers.

The annual wage increase is close to the 3 per cent to 3.5 per cent range that economists say is needed to lift inflation to the Fed's 2 per cent target. Inflation is already firming, in part as commodity prices rise.

Rising inflation, together with a tighter labour market, stock market boom and strengthening global economy, has left some economists expecting that the Fed could increase rates much faster than is currently anticipated by financial markets.

The U.S. central bank lifted its benchmark overnight rate in December and has forecast three rate increases for 2017.

"We continue to expect the Fed to raise its policy rate by an above-consensus four times this year," said Paul Ashworth, chief U.S. economist at Capital Economics in Toronto.

Job growth has averaged more than 186,000 per month since January 2010. While Donald Trump's victory in last November's presidential election sparked a stock market rally and jumps in consumer and business confidence, there has been no surge in either business or consumer spending.

Data ranging from trade to consumer and business spending suggest the economy slowed further early in the first quarter after growing at a 1.9 per cent annualized rate in the final three months of 2016. The Atlanta Fed is forecasting gross domestic product growing at a 1.2 per cent rate this quarter.

"It's important to remember that President Trump inherited an economy that was already making steady progress towards full employment," said Elise Gould, a senior economist at the Economic Policy Institute in Washington.

The labour force participation rate, or the share ofworking-age Americans who are employed or at least looking for a job, increased one-tenth of a per centage point to 63 per cent in February, the highest level since March 2016.

The employment-to-population ratio rose to an eight-year high of 60 per cent from 59.9 per cent in January.

A broad measure of unemployment that includes people who want to work but have given up searching and those working part-time because they cannot find full-time employment fell two-tenths of a per centage point to 9.2 per cent last month.

All sectors of the economy, with the exception of retail and utilities, expanded payrolls in February. Manufacturing employment increased 28,000, the largest gain since August 2013, as rising oil prices fueled demand for machinery.

Retail sector employment fell 26,000, the biggest decline since December 2012, after a gain of 39,900 jobs in January. Retailers including J.C. Penney Co Inc (JCP.N) and Macy's Inc (M.N) have announced thousands of layoffs as they shift toward online sales and scale back on brick-and-mortar operations.

Utilities shed 1,000 jobs last month because of the milder weather. Government payrolls increased by 8,000 jobs, with federal employment rising 2,300 despite a freeze on the hiring of civilian workers that went into effect in January.