U.S. job openings rose to a two-year high in February, led by gains in some of the industries hardest hit during the pandemic and indicating employers are poised to ramp up hiring in the coming months.

The number of available positions increased to 7.37 million during the month from an upwardly revised 7.1 million in January, the Labor Department’s Job Openings and Labor Turnover Survey, or JOLTS, showed Tuesday. The median estimate in a Bloomberg survey of economists called for 6.9 million openings. Vacancies in health care rose to a record while openings in accommodation and food services increased to a four-month high. 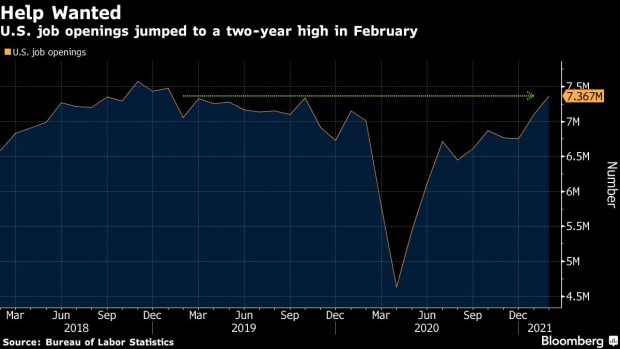 “There is a lot to love in this report,” Nick Bunker, director of economic research at Indeed Hiring Lab, said in a note. “Significant hiring is finally taking place in some industries hit hardest by the pandemic.”

The number of people who voluntarily left their job was little changed as the quits rate held at 2.3 per cent. Separations, which include both layoffs and quits, increased to 5.5 million from 5.3 million. That figure is still lower than levels seen in December.

Openings in the health care industry climbed to 1.45 million, while postings for accommodation and food services jobs rose to 761,000. The retail sector saw 817,000 postings in the month, the most since October 2019.

By region, openings climbed roughly 100,000 in both the Northeast and South. The Midwest and West posted more moderate gains.