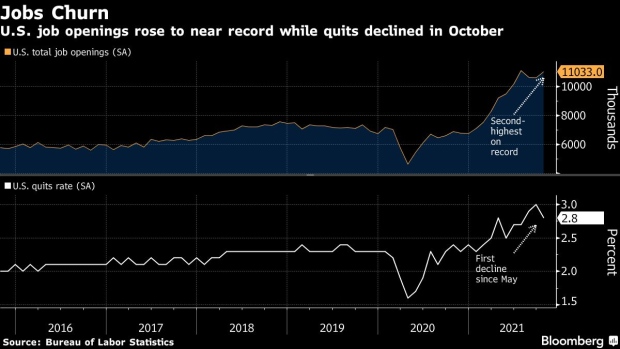 (Bloomberg) -- U.S. job openings jumped in October to the second-highest on record, underscoring the ongoing challenge for employers to find qualified workers for an unprecedented number of vacancies.

The number of available positions rose to 11 million from an upwardly revised 10.6 million in September, the Labor Department’s Job Openings and Labor Turnover Survey, or JOLTS, showed Wednesday. Meanwhile, the quits rate fell to 2.8% from a record 3% in the prior month, the first decline since May, suggesting employers are having some more success retaining workers.

The median projection in a Bloomberg survey of economists called for a rise to 10.5 million job openings.

The increase in job vacancies indicates that -- despite offering higher wages and bonuses -- employers are still having a difficult time filling positions. It will likely take time for labor supply to meet demand as emerging Covid-19 variants raise health concerns and complicate child-care arrangements.

Separate data from the Bureau of Labor Statistics show that there were 7.4 million unemployed Americans in October, far below the total number of job openings. Typically those figures are more closely aligned, but millions of Americans are choosing to stay on the sidelines.

Vacancies increased in accommodation and food services, manufacturing and educational services. Openings grew by the most in the South.

Total hires were little changed in October at 6.5 million, and the hires rate held at 4.4%. Layoffs and discharges remained near a record low.

The number of people quitting fell in transportation and warehousing, finance and entertainment.

The JOLTS figures trail the government’s monthly jobs data. That report last week showed payrolls rose just 210,000 in November, the smallest gain this year. But the labor force participation rate -- the number of Americans working or looking for a job -- rose to a pandemic high, suggesting hiring challenges could ease in coming months.