The number of available positions climbed to 9.21 million during the month from a downwardly revised 9.19 million in April, the Labor Department’s Job Openings and Labor Turnover Survey, or JOLTS, showed Wednesday. 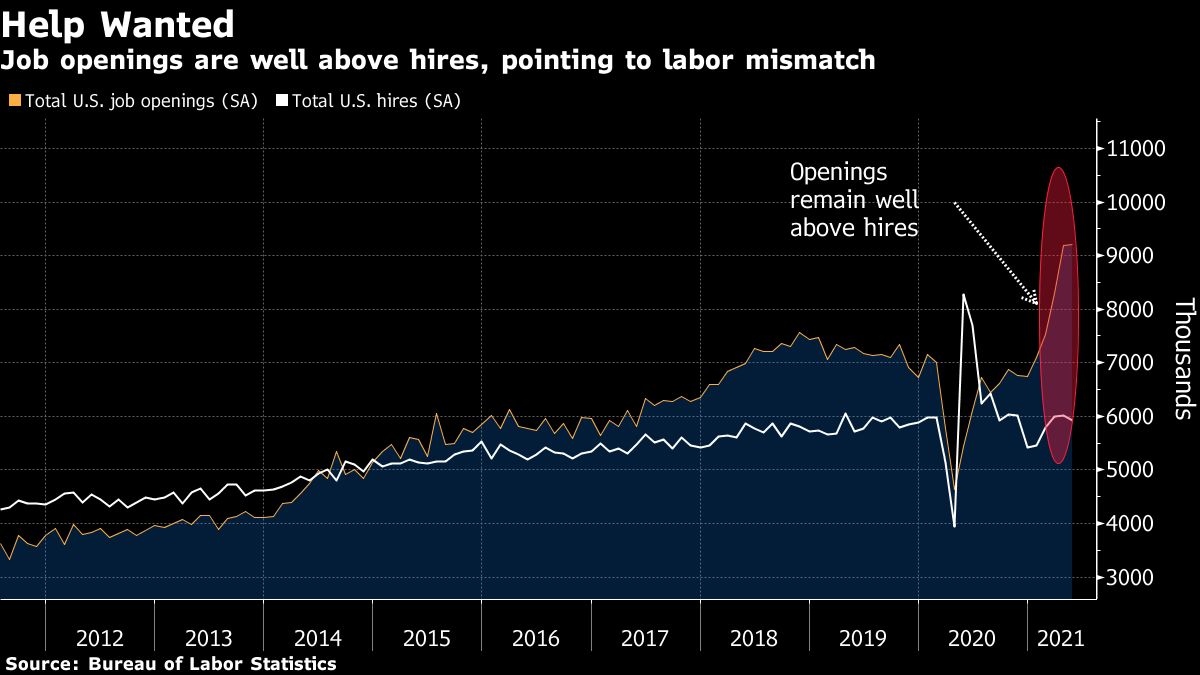 The availability of vaccines paired with a broader reopening of the economy has spurred a snapback in economic activity in recent months, but consumer demand has largely outpaced businesses’ ability to hire. In a race to increase headcount, many businesses have begun raising wages and offering incentives like hiring bonuses to attract applicants.

The number of people who voluntarily left their jobs decreased to a still-lofty 3.6 million in May, as the quits rate dropped to 2.5 per cent. Quits fell in nearly all industries, though they picked up slightly for restaurants and hotels.

At the same time, the figures highlight an elevated number of Americans quitting their jobs to search out new opportunities. Whether seeking more flexible hours, increased pay or the ability to work remotely, the number of quits suggests workers are confident in their ability to find other employment.

The enigma of a worker shortage at a time when millions of Americans remain out of work likely reflects a myriad of factors including child care challenges, lingering coronavirus concerns and expanded jobless benefits. Those factors will likely abate in the coming months though, supporting additional hiring.

Accommodation and food service job openings increased by 89,000 in May, and by 81,000 in health care. Hiring at restaurants and hotels remained robust.

Total hires decreased to 5.93 million in May from 6.01 million, while the hires rate eased to 4.1 per cent. The decline was concentrated in construction, government and professional services.

The total number of vacancies exceeded hires by 3.28 million in May, the highest in records to 2000.

The employment measures for the Institute for Supply Management’s manufacturing and services surveys both contracted in June. A separate report from the National Federation of Independent Business showed small business job openings eased slightly in June, but the reading was second only to the record seen a month earlier. And on June 25, job search website Indeed had 33.6 per cent more job postings than the pre-pandemic baseline.