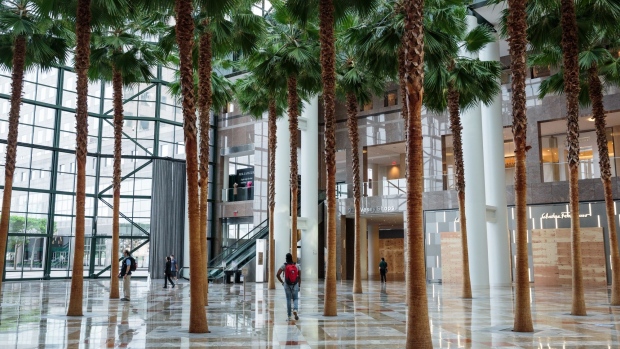 Applications for U.S. unemployment benefits extended their slow decline despite a stream of business reopenings, underscoring the longer-term labor-market challenges caused by the coronavirus pandemic.

Initial jobless claims for regular state programs totaled 1.54 million in the week ended June 6, down from 1.9 million in the prior week, Labor Department figures showed Thursday.

Applications for unemployment insurance have fallen consistently each week since peaking at the end of March, but the volume of weekly filings is still more than double the worst week during the Great Recession. 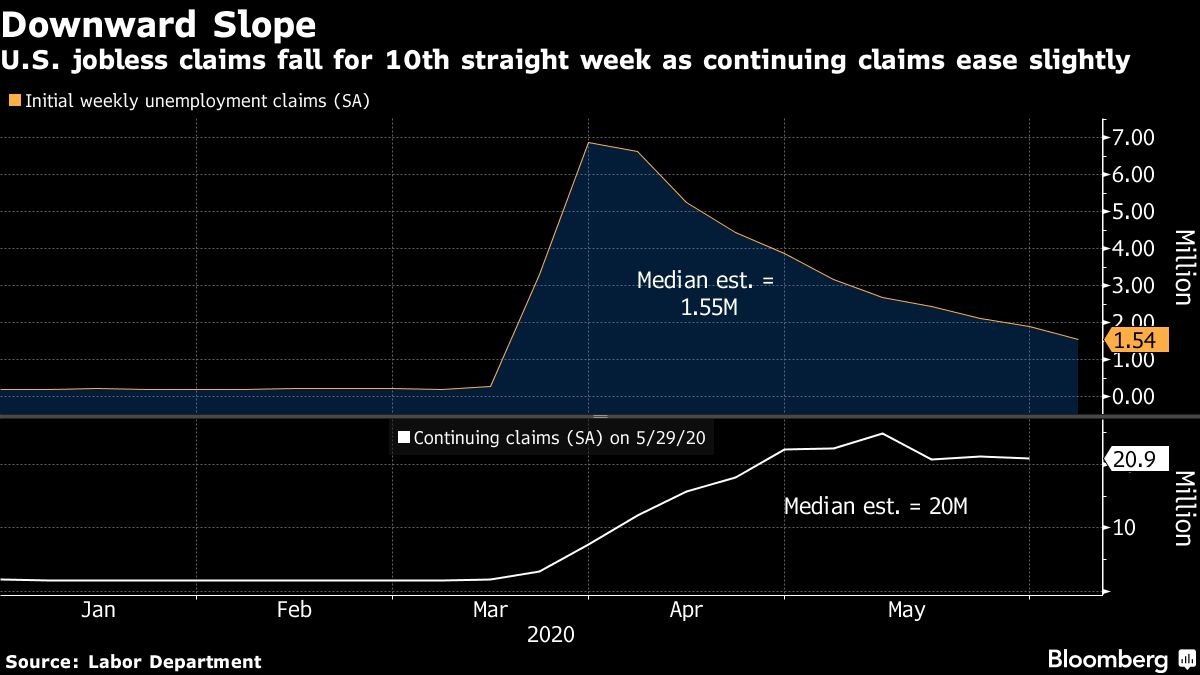 The median estimate in a Bloomberg survey of economists called for 1.55 million initial claims in the latest week.

Continuing claims -- the total number of Americans claiming ongoing unemployment benefits in state programs -- decreased by less than estimated to 20.9 million in the week ended May 30. Those figures are reported with a one-week lag. The four-week average of continuing claims declined for a second week, to 22 million.

When paired with the May employment report out last week, which showed employers added 2.5 million workers to payrolls in the month, Thursday’s data underscore the dichotomy in the labor market. Millions of Americans are returning to work, businesses are reopening and many restaurants are once again serving dine-in customers.

At the same time, companies continue to face diminished demand and are laying off workers as a result of the financial strain. The worst of the coronavirus-related layoffs is likely over, but the secondary effects of what may ultimately be the deepest recession in almost a century could persist for much longer.

While the May employment numbers spurred optimism, “we have a long road ahead of us and jobless claims are still clearly sending a sign that layoffs are still enormous,” said Ryan Sweet, head of monetary policy research at Moody’s Analytics.

“Jobless claims have been declining, but still remain at extraordinarily high levels. ... Continuing claims have been choppy, but are down-shifting, sending a more consistent signal that reduced slack in the labor market is forming.”

Federal Reserve Chair Jerome Powell on Wednesday expressed concern about longer-term unemployment challenges in the wake of the pandemic. “My assumption is that there will be a significant chunk, well, well into the millions of people who don’t get to go back to their old jobs and there may not be a job in that industry for them for some time. It could be some years before we get back to those people finding jobs,” he said.

Yields on 10-year Treasuries extended their decline following the report, while U.S. stocks plummeted amid concern about the virus and the speed of the economic recovery.

While many states saw declines in continuing claims, several saw significant increases including California, Florida and Oregon -- potentially reflecting the processing of a backlog of claims.

California announced on May 27 that it planned to hire about 1,800 additional staff to bolster efforts to deliver unemployment benefits. About 700 people volunteered to work Memorial Day weekend in a concentrated push in processing.

Given the unprecedented surge of claims in recent months, many economists look to the non-seasonally adjusted figures for a more accurate read on claims. Unadjusted initial claims fell by about 83,000 last week, compared with the seasonally adjusted decline of 355,000.

Twenty-four states recorded increases in initial claims, the most since late March. Among them: California with about 29,000, Massachusetts at about 17,000 and New York with about 12,000. Florida recorded the largest decrease, at about 97,000.

“It is astounding to me that we are still seeing over 1.5 million claims in the first week of June,” Stephen Stanley, chief economist at Amherst Pierpont Securities, wrote in a note to clients. Numerous states posted week-to-week increases in claims, which “may reflect the fact that the prior period was holiday-shortened, but given the magnitude of the flows, I would not have expected that to be a meaningful factor.”

In the week ended June 6, states reported 705,676 initial claims for Pandemic Unemployment Assistance, the federal program that extends unemployment benefits to those not typically eligible like the self-employed. The total number of unadjusted continuing claims in all programs fell slightly to 29.5 million in the week ended May 23.

--With assistance from Edith Moy, Sophie Caronello and Olivia Rockeman.