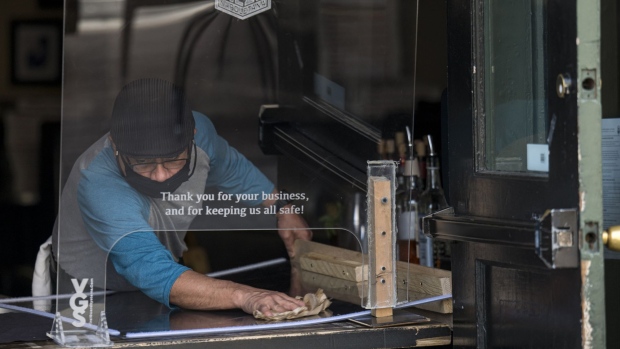 Initial jobless claims in regular state programs were unchanged at 884,000 in the week ended Sept. 5, Labor Department data showed Thursday. Due to a change in the methodology for seasonal adjustment earlier this month, the figure is directly comparable only to the prior week. Continuing claims -- the total number of Americans claiming ongoing unemployment assistance in those programs -- rose 93,000 to 13.4 million in the week ended Aug. 29.

The unexpectedly high levels of claims underscore the uneven nature of the labor market’s recovery. Many businesses are hiring or bringing back workers, yet millions remain unemployed and others are on the chopping block as more companies announce job cuts and small-business aid runs dry.

With lawmakers at a stalemate over additional jobless benefits and President Donald Trump’s stopgap aid ending, unemployed Americans face even tougher challenges than before. In addition, virus cases are climbing again in some parts of the country.

“It is especially concerning that the pace of layoffs has not slowed more materially even though the economy has reopened more fully, and more and more businesses have come back online,” Rubeela Farooqi, chief U.S. economist at High Frequency Economics, said in a note. “The risk now comes from another round of virus outbreaks in coming weeks. The labor market remains at risk of permanent damage which will prolong the path back to pre-pandemic levels.”

Despite the weaker-than-forecast jobless figures, U.S. stocks rose at the open on Thursday, while 10-year Treasury yields were higher.

Before seasonal adjustments, initial claims in state programs rose by about 20,000 to 857,000, led by increases in California and Texas. The rise in California could partially reflect temporary job losses due to wildfires in the state, said Matthew Luzzetti, chief U.S. economist at Deutsche Bank AG.

“It’s still historically-high jobless claims, but I don’t want to overemphasize one single data point given that there is some uncertainty about what’s driving it,” Luzzetti said.Even so, initial claims for Pandemic Unemployment Assistance, the federal program that extends unemployment benefits to those not typically eligible like the self-employed, increased for a fourth straight week. Those claims increased by almost 91,000 from the prior week to 838,916 in the week ended Sept. 5 on an unadjusted basis, the highest since late July and less than 20,000 shy of the total in regular state programs.

If continuing claims fail to show further declines, that would mark a break in labor-market progress since the depths of the pandemic. Data last Friday showed U.S. employers added another 1.37 million jobs in the month, and the unemployment rate fell almost two percentage points to 8.4% -- the second largest one-month improvement in the measure on record.

In addition, any substantial improvement in continuing claims in the coming weeks and months could fail to reflect the full picture if it involves more Americans exhausting their regular benefits and rolling onto a federal program that provides as many as 13 additional weeks of jobless benefits.

Millions of Americans are also heading for long-term unemployment, or unemployment lasting 27 weeks or more. Most states offer 26 weeks of jobless benefits, but many of the workers who have been without a job since late March will hit that mark this month.

Continuing claims for the federal program, known as Pandemic Emergency Unemployment Compensation, increased by about 29,000 to 1.42 million in the week ended Aug. 22.

The Labor Department said the total number of Americans claiming benefits in all programs rose by about 380,000 to 29.6 million in the week ended Aug. 22, compared with about 1.6 million a year earlier. That number, however, has been inflated during the pandemic, as multiple weeks claimed by one person are counted as multiple people instead.

A separate Labor Department report Thursday showed prices paid to U.S. producers rose in August by more than forecast, indicating a rebound in demand from the pandemic-related lockdowns is gradually restoring pricing power.

--With assistance from Edith Moy, Chris Middleton and Nancy Moran.