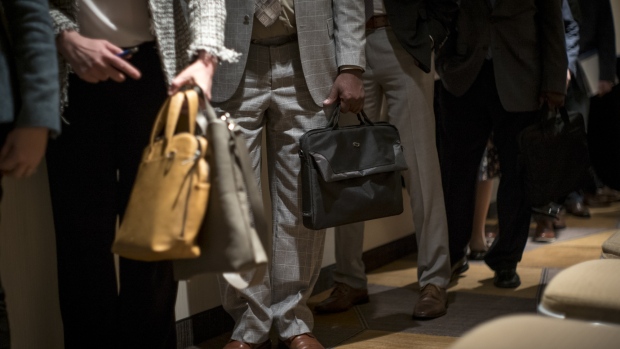 Job seekers stand in a line for an interview at the San Francisco Career Fair & Job Fair in Burlingame, California, U.S., on Thursday, March 14, 2019. , Bloomberg

Initial jobless claims in regular state programs rose by 137,000 to 853,000 in the week ended Dec. 5, Labor Department data showed Thursday. On an unadjusted basis, the figure increased by almost 229,000. The prior week included Thanksgiving, and data tend to be volatile around holidays.

Continuing claims, the number of Americans on ongoing unemployment benefits, jumped by 230,000 to 5.76 million in the week ended Nov. 28. It was the first increase since August.

The claims reading topped all but one estimate in a Bloomberg survey of economists that had called for 725,000 initial filings and 5.21 million continuing claims, on an adjusted basis.

The increase in new claims -- which remain at more than triple pre-pandemic levels -- implies that the labor market recovery will be held back in coming weeks by new restrictions on restaurants and other in-person businesses. Expected distribution of the first virus vaccines this month could help curb spread and ease restrictions, but it’ll likely take months for it to reach a meaningful number of Americans.

The release signals a shaky start for the labor market this month, which could be reflected in the Labor Department’s monthly jobs report for December. Hiring faltered in November with a 245,000 gain that was the weakest in seven months, and Bloomberg Economics forecasts total employment will decline.

Meanwhile, the fate of an additional federal pandemic relief package remains unresolved as Democrats and Republicans continue to negotiate. If a deal isn’t reached by the end of the year, millions of Americans could start the new year with lapsed unemployment benefits.

U.S. stocks fell at the open on concern that prospects for a stimulus deal remained elusive.

The number of Americans claiming Pandemic Emergency Unemployment Compensation, a federal program that extends benefits to those who have exhausted what’s allocated in state programs, decreased slightly to 4.53 million in the week ended Nov. 21.

Continuing claims for Pandemic Unemployment Assistance, which provides benefits to self-employed and gig workers, fell to 8.56 million in the week ended Nov. 21. Those figures, however, have been inflated in recent weeks due to multiple-counting and fraud. In total, more than 19 million Americans were claiming unemployment benefits as of Nov. 21.

California, Illinois and Texas reported the largest increases in initial claims, while Kentucky, Louisiana and Michigan were among those that posted the largest declines. In the Golden State, where some business restrictions began before the Thanksgiving holiday, claims jumped 36 per cent to almost 178,000.