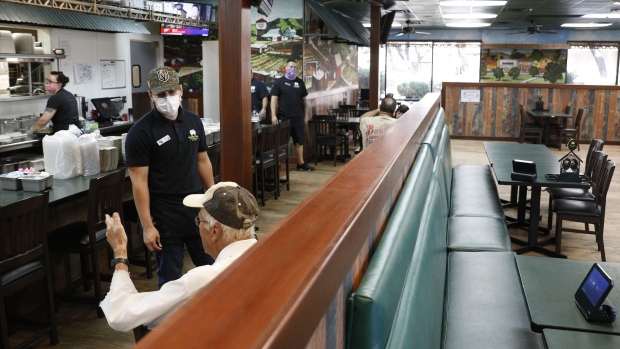 An employee speaks with a customer at a restaurant in Las Vegas on May 9. Photographer: Joe Buglewicz/Bloomberg , Bloomberg

The number of Americans seeking unemployment benefits remained in the millions for an eighth straight week as the economy continued to reel from the coronavirus pandemic.

Initial jobless claims in state programs totaled 2.98 million in the week ended May 9, Labor Department figures showed Thursday, following 3.18 million the prior week. While filings have eased for a sixth straight week, they failed to decline as much as economists had projected, with a median estimate of 2.5 million.

U.S. stocks fell at the open, while 10-year Treasury yields were lower and the dollar remained higher.

With the latest numbers, a total of 36.5 million applications for unemployment insurance have been filed since the virus began shutting down businesses in mid-March. That’s close to the level of all claims filed during the last recession, which ran for 18 months. 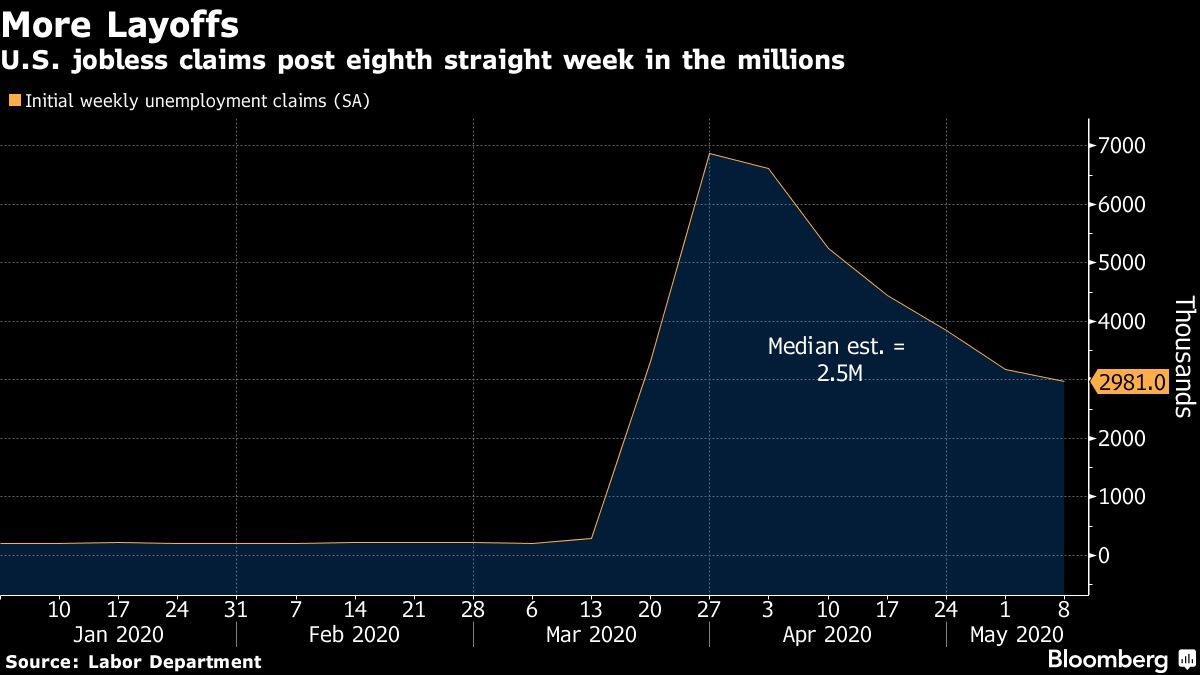 Continuing claims -- the total number of Americans already receiving unemployment benefits -- increased to a record 22.8 million in the week ended May 2. That sent the insured unemployment rate, measuring this figure as a share of the total eligible labor market, to 15.7% for that period. The 456,000 increase in continuing claims was the smallest in seven weeks.

There were two key anomalies in the latest report.

For unadjusted initial claims, Connecticut reported a surge to about 298,700 from 36,100 the prior week -- dwarfing any other state change.

Meanwhile, California’s continuing claims for the week ended May 2 plummeted to 2.87 million, cutting almost in half the number of people on benefits in the most populous state in just one week. That decline was well beyond other places for the period, with most states reporting increases.

The worse-than-expected data underscore the ongoing devastating impact of the coronavirus as dine-in restaurants and retailers remain largely closed and concerned Americans stay inside rather than spend. Federal Reserve Chairman Jerome Powell on Wednesday outlined a more-troubling economic scenario posed by the possibility of mass bankruptcies and unemployment.

“Long stretches of unemployment can damage or end workers’ careers as their skills lose value and professional networks dry up, and leave families in greater debt,” Powell said in remarks to a virtual event hosted by the Peterson Institute for International Economics.

On a non-seasonally adjusted basis, Connecticut reported the most claims. Georgia, Florida, California and New York also each had more than 200,000 in filings, though the change from the prior week wasn’t as large.

Claims under the federal Pandemic Unemployment Assistance program -- which expands benefits to individuals not typically eligible, like gig workers -- totaled about 842,000 last week, compared with 1 million the prior week. Those numbers are also non-seasonally adjusted. Continuing claims under the program were 3.4 million as of April 25.

While the claims indicate Americans are able to at least file for benefits as they lose their jobs or are furloughed, it’s less clear how many are actually seeing the funds. Some states have reported delays in approvals and payments, while many people -- after glitches and delays -- haven’t received further information or benefits.

Some states, including Georgia, Pennsylvania, Florida, and Arizona, began to let businesses reopen and have generally eased restrictions in recent weeks. It’s likely still too early to gauge the impact on the local economy and labor markets, though, as many people are still refraining from resuming normal activities.

While still at unprecedented levels, weekly claims have been decelerating after hitting 6.9 million at the end of March. Powell also said Wednesday that the unemployment rate is likely to peak in a month or two, but will take time to decline as businesses reopen slowly and there’s permanent scarring in the economy.

In the previous downturn, weekly initial claims peaked at around 650,000 about three months prior to the official end of the recession.

“A drop in continuing claims would provide an even more compelling signal of inflection, with those unemployed starting to be rehired,” Bloomberg chief U.S. economist Carl Riccadonna wrote in a note earlier Thursday. “This will probably not occur for at least a few more weeks, particularly with initial claims still well north of 1 million.”