The last time U.S. payroll forecasts were this low, hurricanes had slammed the country in 2017, temporarily closing businesses. Or go back to 2013 when there was a federal government shutdown.

But for the September jobs report due Friday, Wall Street economists see a more persistent storm at play: The trade war and manufacturing recession. Those factors are starting to permeate the economy at a time when companies are already struggling with a shrinking pool of qualified workers.

The combination of forces has pushed down the median estimate for private payrolls to a gain of just 130,000 last month. That’s the weakest projection heading into a jobs report in seven years, outside of months affected by events such as major storms or the shutdown. Estimates for total nonfarm payrolls are higher, at 148,000, because of an expected boost from temporary census hiring. 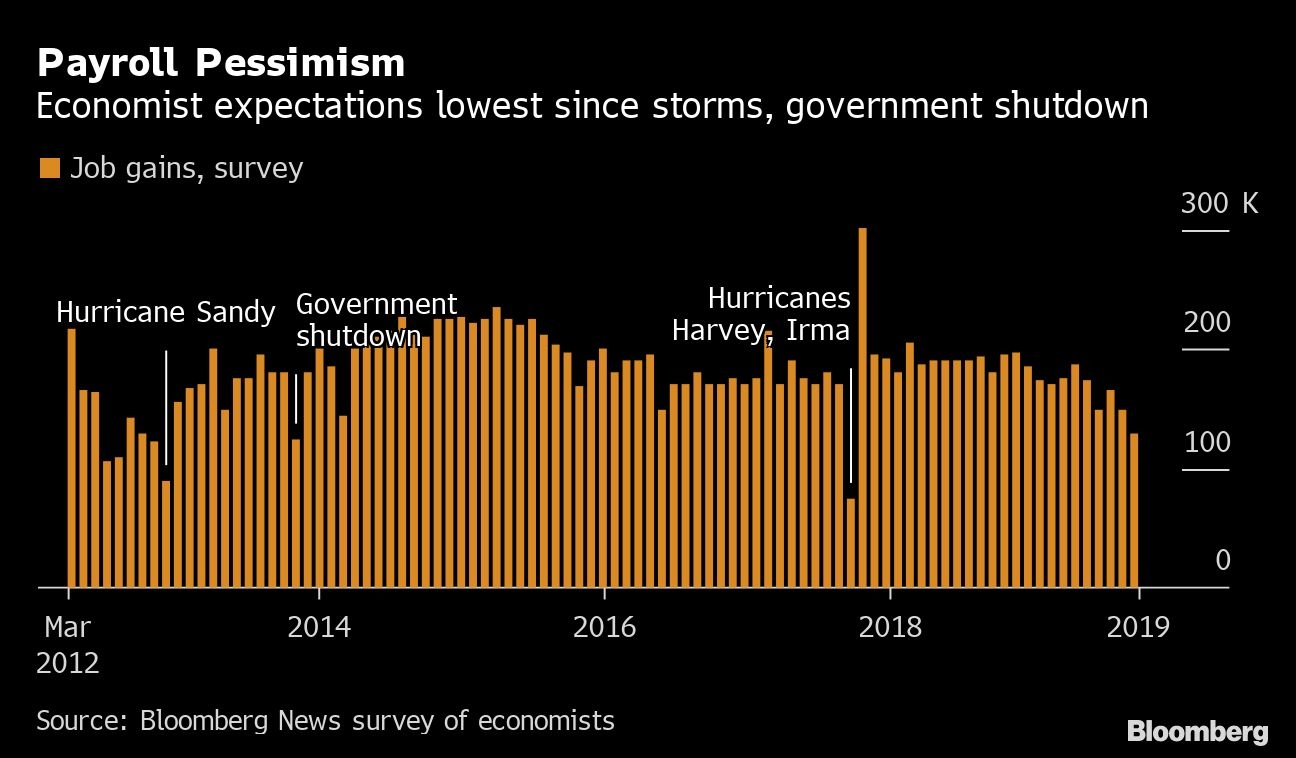 A reading that’s even weaker than predicted would probably boost investor expectations that the Federal Reserve will cut interest rates Oct. 30 for a third straight meeting and potentially again in December, completing a reversal of all four hikes from 2018. It may also force Fed officials to rein in their assessment of the labor market, which they’ve labeled as “strong” in policy statements as recently as September.

For President Donald Trump, who has repeatedly pinned any economic weakness on the central bank, a sluggish labor market could pose a threat to his reelection in 2020. Currently the U.S. is on track to add about 1.9 million jobs this year, which would be the smallest gain since 2010 and down from 2.7 million in 2018.

U.S. stocks slumped 3 per cent in the last two days amid dour economic data. On Tuesday, the Institute for Supply Management said its factory index fell deeper into contraction in September with the worst reading in a decade, while the employment gauge hit a three-year low. Meanwhile, companies’ hiring was the slowest in three months, according to a report from private data provider ADP.

“It’s starting to roll into one big ball of negativity,” said Jennifer Lee, a senior economist at BMO Capital Markets in Toronto. “You just don’t have the supply of workers out there, but now it’s starting to become worse.”

“If the company’s dealing with the manufacturing slowdown, trade with China issues, weaker demand, it falls into your hiring expectations: ‘If we’re not going to get that many orders, we don’t need as many people,’” Lee said.

A separate Labor Department report Thursday showed filings for unemployment benefits ticked up to a four-week high, though they remain historically low.

Other indicators already point to a slowing economy and weaker growth ahead. Companies are pulling back spending as tariffs weigh on business decisions and global demand slides. The August gain in consumer spending was the smallest in six months. 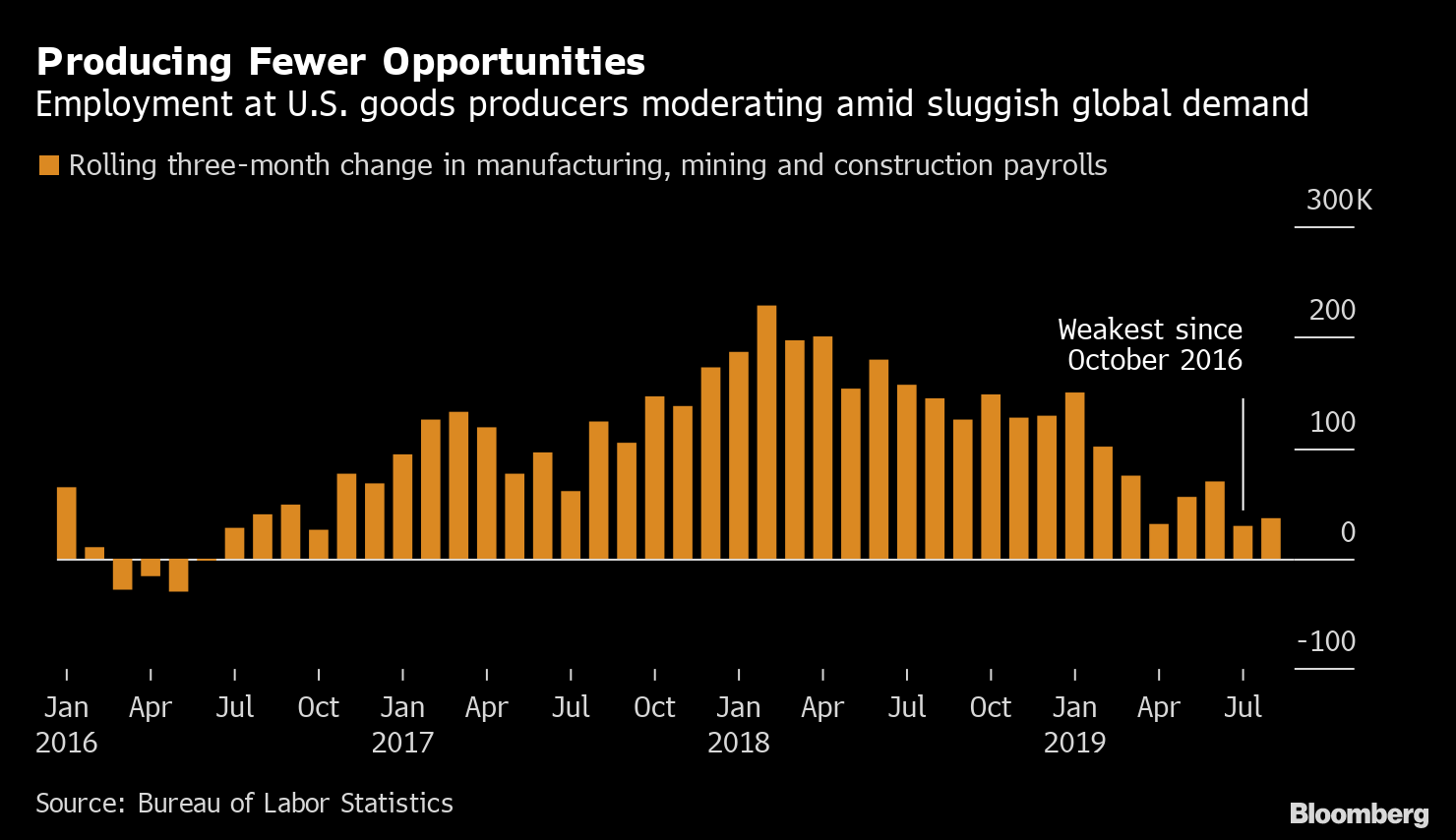 So far, manufacturing has been hit hardest, so investors and economists will be keenly watching the September report to show whether the pain has spread more broadly in the labor market -- whose relative strength has helped keep the record-long U.S. expansion from turning into a recession.

“There’s much more scrutiny on the nonfarm payrolls and looking to see: Is the U.S. economy slowing down with the rest of the world?” said Zhiwei Ren, a portfolio manager at Penn Mutual Asset Management, which oversees $28 billion. “In the last few months, it hasn’t been a great focus of the market because the U.S.-China trade talks, and Fed policy has been more important. But now people are starting to question the strength of the U.S. economy.”

The recent job numbers already suggest that employers are either having difficulty filling positions, are hiring fewer people due to weaker demand, or both.

“The economy is losing momentum in the back half of the year to a degree sufficient to meaningfully depress the pace of hiring. Job creation has already decelerated markedly, and diminished business confidence in recent months will exacerbate the defensive posturing among hiring managers.”
-- Carl Riccadonna, Yelena Shulyatyeva, Andrew Husby and Eliza Winger

“The labor market is the one bit of strength that we have,” he said. “If that ceases to be the case, then I’m not sure why the Fed wouldn’t respond with aggressive cuts.”