U.S. January jobs data might be bad for markets, allowing the Fed to be more hawkish: Strategist

A broad-based 467,000 gain in nonfarm payrolls, which exceeded all economists’ projections, followed a 709,000 total upward revision to the prior two months, Labor Department figures showed Friday. The unemployment rate ticked up to 4 per cent, and average hourly earnings jumped. 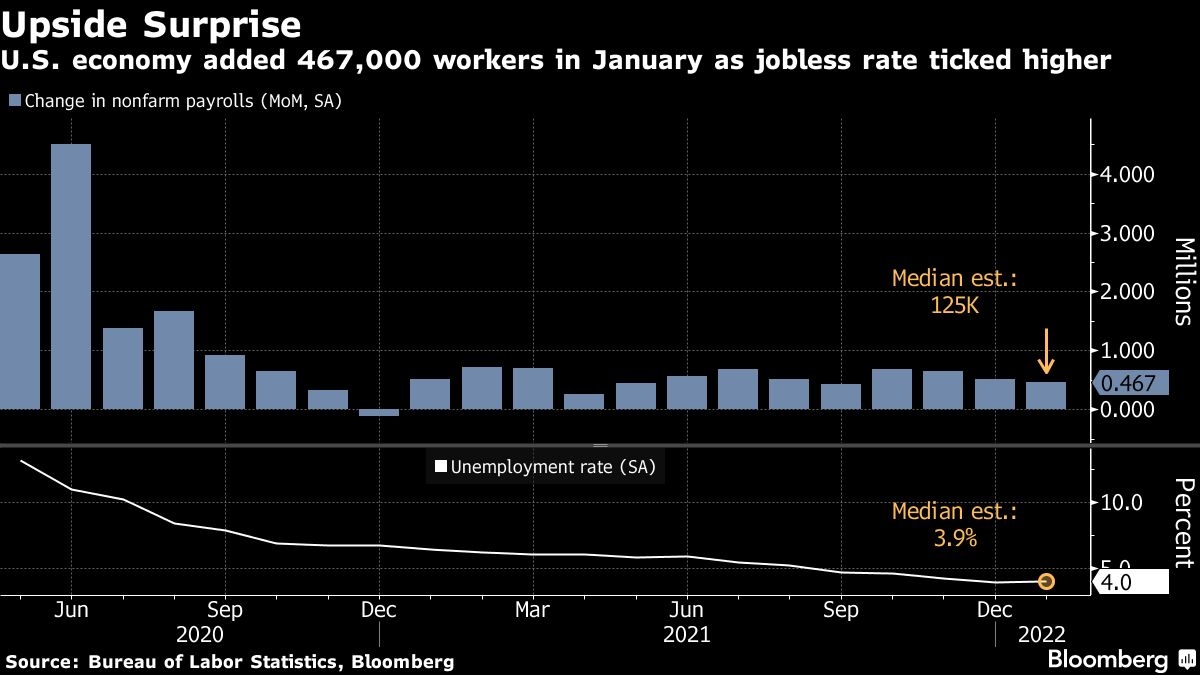 A variety of factors including omicron, seasonal adjustment and the way workers who are home sick are factored in make interpreting the January data challenging. But the increase in employment, along with substantial upward revisions to prior months, illustrate newfound momentum in the labor market. All the while, businesses are trying to retain as many workers as they can, including those hired for the holiday season.

The report suggests demand for labor remains robust and further reinforces Fed Chair Jerome Powell’s description last week of the labor market as “strong.” With workers hard to come by, seasonal layoffs in January were smaller than usual.

The figures also validate the central bank’s intention to raise interest rates in March to combat the highest inflation in nearly 40 years.

Treasury yields surged and the S&P 500 was mixed. Investors began to price in the slight possibility of a sixth quarter-point boost by the end of this year, while continuing to see a March increase as a lock and nudging up the chance of a 50-basis-point jump.

“This seals the deal for a March hike,” said Ryan Sweet, head of monetary policy research at Moody’s Analytics Inc., who added that the chance of a half-point increase is still unlikely. “The Fed is going to take away from this that the economy is barreling toward full employment and this will make it more difficult for them to gracefully engineer a soft landing.”

After adjustments to reflect updated population estimates, the labor force participation rate -- the share of the population that is working or looking for work -- increased to 62.2 per cent, thanks to gains among both men and women. Without that impact, the rate held at 61.9 per cent.

Meanwhile, average hourly earnings rose 0.7 per cent in January, the most since the end of 2020, and 5.7 per cent from a year ago, further fanning concerns about the persistence of inflation. The average workweek dropped.

The faster-than-expected advance in pay could fuel market concerns about the Fed taking an even more aggressive stance on inflation this year.

Despite the better-than-expected report, the impact of omicron on the labor market in January was substantial. There were 3.6 million employed Americans not at work due to illness, more than double that in December. Meanwhile, 6 million people were unable to work in the month because their employer closed or lost business due to the pandemic, roughly twice that in December.

The report also included revisions to total nonfarm employment as part of the department’s annual benchmark revision. For all of 2021, payrolls were revised up 217,000. 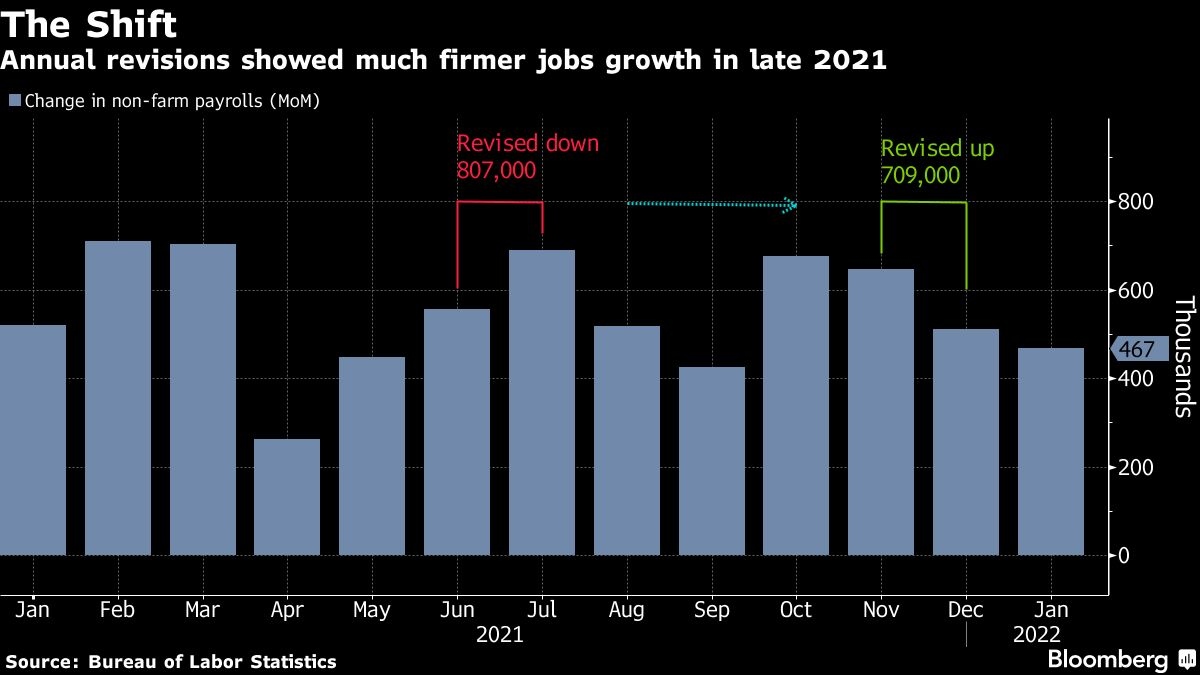 The jobs report is good news for the White House, which had been tempering expectations ahead of time out of concern that the omicron variant would negatively affect the data. The median estimate in a Bloomberg survey of economists called for a 125,000 advance.

The job gains were broad based, led by a 151,000 advance in leisure and hospitality. Transportation and warehousing, retail trade and professional and business services also posted solid increases.

The solid employment growth in several categories may reflect businesses choosing to retain more holiday workers than normal in the face of a tight labor market.

Looking at unemployment rates by demographics, most groups were relatively little changed from the prior month. Black Americans continue to have the highest jobless rate at 6.9 per cent, double that of White workers. Participation among women age 25-54 was little changed, suggesting child care remains a limitation for working mothers.

Friday’s report “is much more about what it tells us about those revisions, but what it tells us today: this is the labor market screaming,” Jeff Rosenberg, a senior portfolio manager at BlackRock Inc., said on Bloomberg Television.