The U.S. labour market made greater progress than expected last month digging out of a deep hole, yet optimism over the rebound was tempered by stubbornly high layoffs and a resurgent coronavirus outbreak across the country.

Thursday’s simultaneous release of the monthly employment report and the weekly jobless claims data offered diverging snapshots of the economy: One reflecting a flurry of rehiring — particularly at restaurants and retailers — as state economies reopened. The other reflecting a jump in new virus cases, which has led many of those same states to halt or even walk back reopening plans. 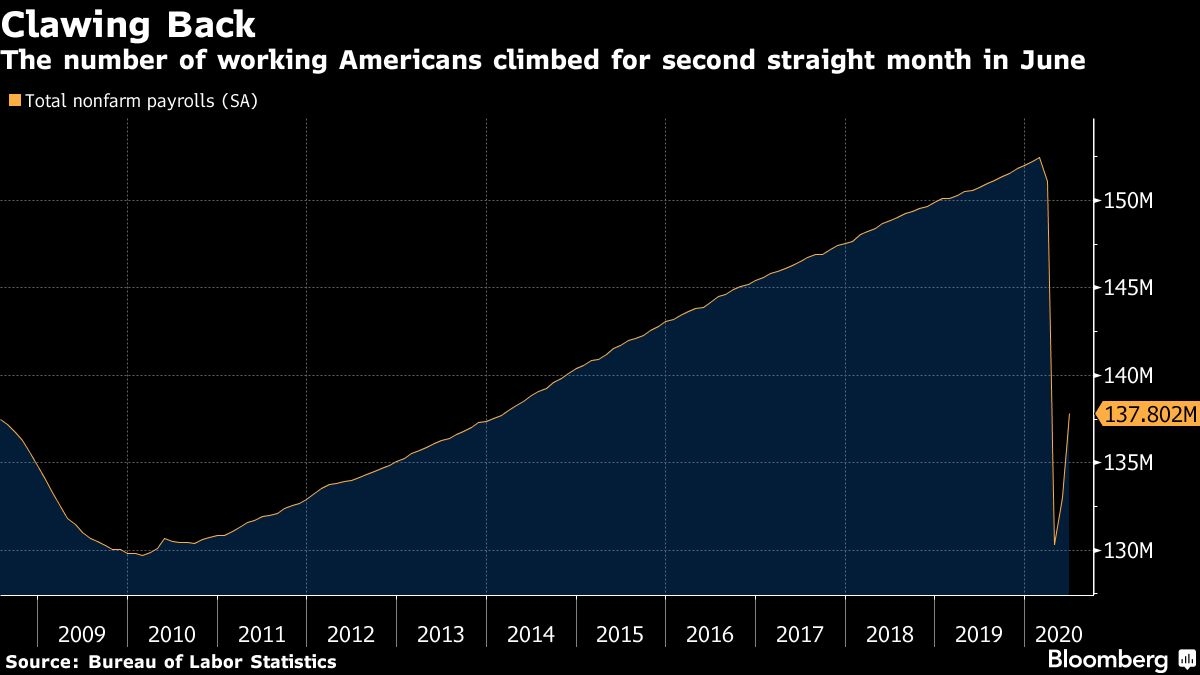 While President Donald Trump said the jobs figures proved the economy is “roaring back,” the pace of recovery may slow or even stall if employers grow cautious and delay rehiring workers — in fact, some have already been laid off a second time.

Paired with the coming expiration of the federal government’s extra US$600 in weekly unemployment benefits, the economy could take another hit in the months ahead.

“No one should be expecting we’re on a straight trajectory higher,” said Jennifer Lee, senior economist at BMO Capital Markets. Initial jobless claims are the “worrying part” of Thursday’s figures, and “it’s going to be a few steps forward and a couple steps back,” she said.

Payrolls rose by a more-than-expected 4.8 million in June after an upwardly revised 2.7 million gain in the prior month, according to Labor Department figures. The data, which offer a snapshot of mid-month conditions, also showed the unemployment rate fell for a second month to 11.1 per cent. That was a bigger decline than anticipated, but the rate still remains far above the pre-pandemic half-century low of 3.5 per cent.

U.S. stocks rose following the data, while Treasuries and the U.S. dollar fluctuated.

“The upward surprise in the June jobs report demonstrates that economic fundamentals remain strong enough to facilitate a relatively robust recovery once COVID-19 is under control. However, in the near term, the positive signal somewhat fades given the recent sharp acceleration in new virus cases and the looming income cliff stemming from the expiration of augmented unemployment benefits this month.”

The Labor Department’s Bureau of Labor Statistics has largely fixed a problem that resulted in respondents being misclassified as employed when they should have been labeled as unemployed. Adjusted for the errors, the June unemployment rate would have been about one percentage point higher than reported — or 12.3 per cent, compared with an adjusted 16.4 per cent in May. “The degree of misclassification declined considerably in June,” BLS said. 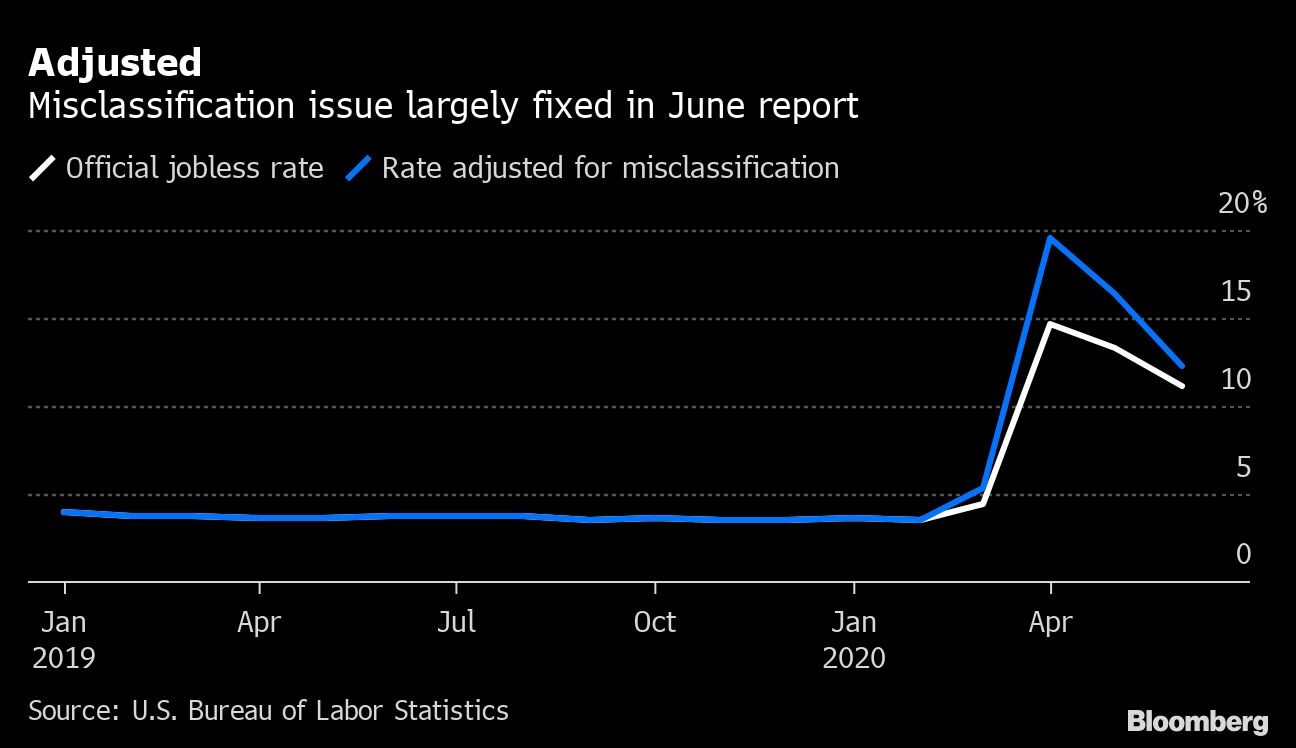 The increase in payrolls was led by leisure and hospitality and retail, illustrating the effect of the easing of business restrictions. Health care also saw increases as doctors’ and dentists’ offices reopened.

White House economic adviser Larry Kudlow, speaking on Bloomberg Television, said the report was “spectacular” and many more people temporarily laid off will return to work.

The campaign of Democratic challenger Joe Biden didn’t have an immediate response on the figures. But the Democratic National Committee chairman, Tom Perez, voiced concern that while the June report reflected the widespread reopening of businesses, states are now “backtracking” in their progress “and American workers are the ones feeling the pain — all because of Trump’s incompetent handling of this pandemic.”

Meanwhile, the household survey showed more than 2.8 million Americans permanently lost their job in June, a 588,000 increase from a month earlier that was the biggest since the start of 2009. While the total number is the highest in six years, the figure bears watching for more systemic damage to the labor market caused by the pandemic.

“The first thing I looked at was number of people permanently laid off and that continues to climb, and I think that’s some cause of concern,” said Ryan Sweet, head of monetary policy research at Moody’s Analytics. “Even when this pandemic’s over those people are going to need to find work.”

Average hourly earnings fell 1.2 per cent from the prior month, largely reflecting job gains among lower-paid workers, following a one-per-cent drop in May.