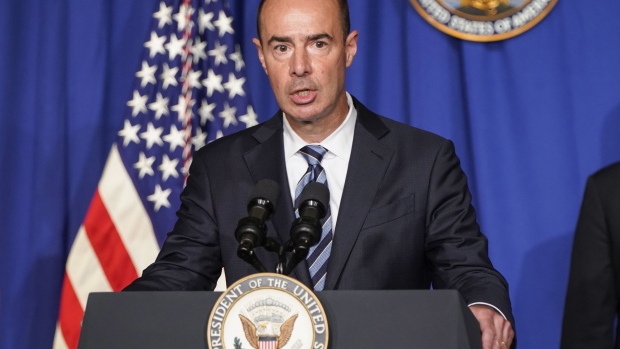 Eugene Scalia, U.S. secretary of labor, speaks during a White House Coronavirus Task Force briefing at the Department of Education in Washington, D.C., U.S., on Wednesday, July 8, 2020. President Donald Trump today said he may cut funding if schools do not open before the November election. , Bloomberg

(Bloomberg Law) -- Fraud investigations into the H-1B specialty occupation visa program will now be a joint effort by the federal departments of Labor and Homeland Security, which will share data and records on guestworkers under a new agreement announced Friday.

It’s a source of information the DOL has “never previously accessed” for enforcement purposes, the agency said in a statement.

The DOL’s greater involvement in investigating potential violations of the Immigration and Nationality Act’s temporary visa program for high-skilled workers also represents the first time the agency’s secretary has exercised this authority to personally initiate “more robust examinations” of employers’ use of H-1B workers, it said.

The U.S. Citizenship and Immigration Services will, as part of its adjudication of petitions, refer suspected employer violations within the H-1B program to the DOL’s Office of Foreign Labor Certification for administrative and targeted site visits.

The agreement arose from President Donald Trump’s June 22 immigration proclamation suspending entry to certain temporary work visa holders to protect jobs in the country for U.S. workers through the rest of the year. The proclamation called on the labor secretary to make use of his enforcement power, and the agreement “signed today will be central to the Department’s work carrying out the President’s policy of ensuring that the use of foreign labor does not harm American workers,” DOL said in a statement.

The department is led by attorney Eugene Scalia, who was nominated by Trump and confirmed by the Senate last year.

USCIS said in a tweet after the announcement that “this combined effort further enhances the federal government’s ability to crackdown on U.S. employers exploiting the H-1B temporary worker program & discriminating against an American labor force significantly impacted by COVID-19.”

A spokesman for the agency declined to comment further. DOL hasn’t yet released a copy of the agreement. The accord replaces a previous inter-agency memo signed in January 2017.

The agencies haven’t been as transparent with the public about information and data sharing in the past, though there have been times where the agencies have been closer or aligned, said Susan Cohen, chair of Mintz, Levin, Cohn, Ferris, Glovsky and Popeo P.C.'s immigration practice in Boston.

“This is likely to be quite significant, because it sounds like there will be a very proactive sharing of data and filings by USCIS with the Department of Labor around H-1B issues, and that they hope that will lead the Department of Labor to initiate more investigations and potentially find violations of the H-1B regulations,” she said.

Investigations can potentially lead to penalties, such as fining companies for willful violations and awarding back pay to workers if DOL finds that an H-1B employer didn’t pay the correct wage, sometimes going back over significant periods of time. Ultimately, this kind of scrutiny could even have a chilling effect on employers wanting to hire H-1B workers, Cohen said.

The new agreement puts employers hiring H-1B workers on notice that the agencies will be increasing enforcement efforts, Cohen added. “It’s a clear signal that they hope to find violations.”

To contact the reporter on this story: Genevieve Douglas in Washington at gdouglas@bloomberglaw.com

(Updated with additional reporting throughout.)