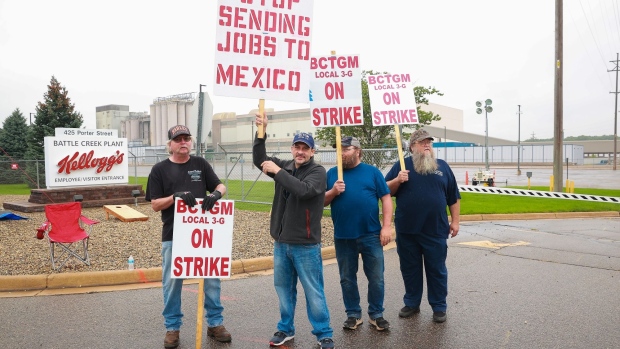 A Deere & Co. worker holds a sign during a strike outside the John Deere Des Moines Works facility in Ankeny, Iowa, U.S., on Friday, Oct. 15, 2021. Thousands of workers at Deere & Co., the world’s biggest farm machinery maker, began picketing Thursday for the first time in more than three decades to demand better pay as the company heads for its most profitable year ever. , Bloomberg

(Bloomberg) -- U.S. organized labor is having a moment after decades of erosion in both influence and power, giving workers their best chance in recent memory to claw back lost ground.

In the wake of the Covid-19 pandemic, unions are finding they suddenly have the upper hand—or at least, more solid footing—when it comes to negotiating wages and benefits, spurring a flurry of new picket lines. Nearly 40 workplaces across the nation have gone on strike since Aug. 1, according to Bloomberg Law’s database of work stoppages, almost double the number during the same period last year.

From Deere & Co.’s factories and Kellogg Co.’s U.S. cereal plants to nurses in Massachusetts and distillery workers in Kentucky, more than 100,000 union workers across a vast swath of industries are either on strike or close to it, leading some to dub this month “Strike-tober.” One of Hollywood’s most powerful unions is set to strike on Monday for the first time in its 128-year history unless contract talks are resolved.

“Workers are right to think the ball is in their court,” said Adam Seth Litwin, a professor of industrial and labor relations at Cornell University. “They need to take a really big bite of the apple right now, because whatever they get they’re going to have it in their mouth for a long time.”

The newfound forcefulness of labor unions is in stark contrast to the direction of the last several decades. Private-sector unionization has plummeted for generations as some industries decamped to the largely ununionized American South and a slack labor market made it easier to replace striking workers. Only 10.8% of the U.S. workforce belonged to unions last year, Bureau of Labor Statistics data show. That’s down from a peak of 34.8% in 1954, according to Pew Research Center. Amid threats of automation or offshoring, and companies taking full advantage of the leeway afforded to them by the courts, those dwindling unionized workers made significant concessions in past contract fights, unsure they had a better alternative.

But now employees, trying to reclaim what they gave up before, have been emboldened by a series of related events: soaring company profits, a renewed respect for essential workers and rekindled political will in Washington. Plus there’s the hard truth of today’s labor market: Companies in many industries are finding employees downright impossible to replace. Here are several key factors at play:

Working through the pandemic has been a transformative experience for many laborers, who garnered public support as “essential workers.” At the same time, many felt the companies they worked for didn’t do what was necessary to keep them safe or reward their sacrifices.

“Essential workers are tired of being thanked one day and then treated as expendable the next day,” Liz Shuler, president of the AFL-CIO, said in a speech Wednesday in Washington. “The headline isn’t that there’s a shortage of people willing to return to work. Instead, it’s a scarcity story. We have a shortage of safe, good-paying, sustainable jobs.”

That’s the feeling at Deere, where assembly employees were categorized as front-line workers to continue operations, creating a sense that the company owes them. Kellogg workers, too, feel like they put themselves at risk in order to keep America’s pantries full during lockdowns.

“When it comes to the contract, that raises the bar for what they’d like to see and what they think they deserve,” said Harley Shaiken, a labor professor at the University of California at Berkeley.

Above all, the pandemic made a lot of workers rethink their values and priorities, and that’s coming to a head in collective bargaining.

“Covid put the rat race in perspective,” said Amy Thurlow, a Los Angeles-based script coordinator represented by the International Alliance of Theatrical Stage Employees union. Thurlow, 33, said it isn’t uncommon for her to work 80-hour weeks and on weekends. Now it’s, “Oh wait, getting to see your family is very important.”

Also at play are rising profits. Deere has already posted a record $4.7 billion profit this year, creating a perception among some workers that the manufacturer is holding out on wages and benefits.

There’s a similar feeling at Kellogg. Before the pandemic, cereal was almost an albatross around the company’s neck, as consumers found more exciting breakfast options.  But that changed as everyone got locked up at home—U.S. consumption of Kellogg’s cereal was up almost 16% year-on-year at the start of the pandemic.

Kellogg Chief Executive Officer Steven Cahillane was awarded a compensation package valued at $11.67 million for 2020, creating a ratio of 279 to 1 when compared with the median total compensation for the rest of the company’s employees, filings show. Nationally, CEO pay in 2020 grew 19% over the previous year, according to the left-leaning Economic Policy Institute.

“Workers are producing food that’s increased in demand and increased profits during the pandemic,” said Rebecca Givan, an associate professor of labor studies and employment relations in the School of Management and Labor Relations at Rutgers University. “And now they’re being required to work extremely long hours and not getting any share of those increased profits.”

A shortage of workers is also giving unions more confidence they can walk off the job without being replaced. The latest jobs report from the Labor Department showed the U.S. added just 194,000 people to payrolls in September, the smallest gain this year. The slower pace of hiring in part reflected employers’ struggle to recruit and retain qualified workers.

“In this period of labor shortages, candidly, you’re going to have to step up as an employer,” said Chris Thornberg, founding partner of independent research firm Beacon Economics LLC. “You're going to have offer more: better training, better quality of life.”

Job openings in the U.S. currently sit near a record 11 million, while the quits rate was at 2.9% in August, the highest since 2000. “Workers feel it,” Thornberg said. “They know it’s a seller’s market.”

For the first time in awhile, unions feel like Washington is on their side, given the Biden administration’s union bent and left-wing politicians like Senator Bernie Sanders and Representative Alexandria Ocasio-Cortez amplifying their voices.

“Not only the economic power, but the political power, is on their side,” Cornell’s Litwin said. “Employers are going to cave because they know they have to.”

Each successful union win is also galvanizing for those still in the throes of collective bargaining. “Strikes are contagious in that every time a worker sees a successful strike, they can see what they can win by going on strike,” said Givan, the Rutgers professor.

The Kellogg cereal workers are members of the Bakery, Confectionery, Tobacco Workers and Grain Millers International Union—the same ones that represented the Nabisco workers in their strike this summer, which brought increased wages and more flexible work schedules.

“It’s become more of a movement than ever before,” said Dan Osborn, local president of the Omaha chapter of the BCTGM. “The more we win, the more we’re going to continue to win.”