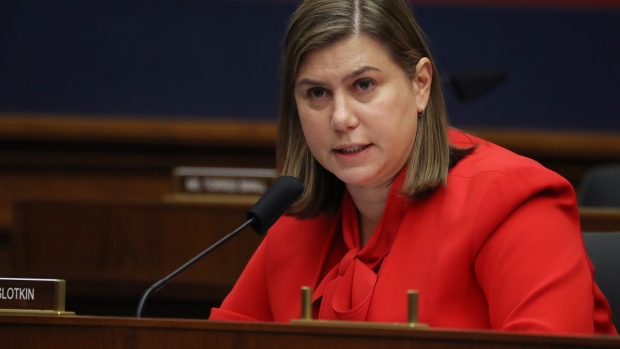 Representative Elissa Slotkin, a Democrat from, a Democrat from Michigan, speaks during a House Homeland Security Committee security hearing in Washington, D.C., U.S., on Thursday, Sept. 17, 2020. The hearing focused on international terrorism threats, the rise in domestic terrorism incidents and recent shootings as well as election security and cyber threats. , Bloomberg

(Bloomberg) -- A U.S. lawmaker defied what she says was a stern demand from China that she abandon a trip to Taiwan, a move that risks escalating tensions between Washington and Beijing.

“When news of our trip broke yesterday, my office received a blunt message from the Chinese Embassy, telling me to call off the trip,” Elissa Slotkin, a Democrat from Michigan, wrote on Twitter shortly after landing in Taiwan late Thursday as part of a trip that that also includes Japan and South Korea.

“But just as with other stops, we’re here to learn about the region and reaffirm the U.S. commitment to our hosts, the Taiwanese,” she added. “I’m looking forward to an informative trip.”

China regards matters relating to Taiwan as internal even though it has never ruled the island. When a separate group of U.S. lawmakers arrived in democratically ruled Taiwan on an American military plane earlier this month, China’s military said it conducted joint operations in the Taiwan Strait in response to “the erroneous words and deeds of relevant countries on the Taiwan question.”

Slotkin is in Taiwan along with Democrats Mark Takano, Colin Allred and Sara Jacobs, and Republican Nancy Mace. Slotkin has been vocal about the impact the global semiconductor shortage has had on the car industry in the southern Michigan region she represents.

The White House and industry representatives have been pressing Congress to pass legislation that would provide $52 billion in funding to help build chip-making facilities in the U.S. Senate Majority Leader Chuck Schumer has said the funds would enhance U.S. competitiveness with China.

Slotkin and the other legislators are scheduled to meet Taiwanese President Tsai Ing-wen, and visit the Defense Ministry and Veteran Affairs Council during their stop, according to local reports.

Ten lawmakers from Lithuania, Latvia and Estonia plan a trip to Taiwan next week to speak at a parliamentary forum. China this week downgraded ties with Lithuania because the Baltic nation let Taipei set up a set up a representative office under the name of Taiwan.

Dimon’s Apology Undercuts His Own Words on China Free Speech

China has ramped up military, diplomatic and economic pressure on Taiwan’s ruling Democratic Progressive Party, which asserts the island is a de facto sovereign nation awaiting wider international recognition and not part of Chinese territory, as Beijing claims. Still, the Taiwan government has avoided a formal declaration of independence that could trigger a war.

Beijing has also threatened to sanction more Taiwanese officials after hitting Premier Su Tseng-chang, Foreign Minister Joseph Wu and Legislative Yuan President You Si-kun with punishments including bans on travel to the mainland.