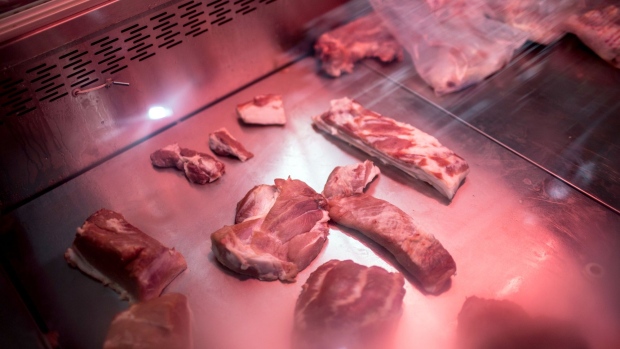 Cuts of pork are displayed for sale at a market in Hanoi, Vietnam, on Monday, May 27, 2019. Pork has long been the protein of choice for the Vietnamese. As of last year, about 70% of all meat consumed in the country was pork, while chicken made up about 20%, followed by beef at less than 10%. Photographer: Yen Duong/Bloomberg , Bloomberg

(Bloomberg) -- A bipartisan group of U.S. House lawmakers is asking the Biden administration to seek the elimination of Vietnam’s tariffs on American pork and address other restrictions as it engages with the Southeast Asian country over currency and trade practices.

American pork producers have failed to gain significant access to pork-loving Vietnam that has seen its domestic pig farms devastated by the African swine fever, increasing the demand for imported pork, according to a letter on Wednesday to U.S. Trade Representative Katherine Tai that was signed by 72 members of Congress, both Republicans and Democrats,

However, “significant tariff and non-tariff barriers unfortunately prevent U.S. pork from competing in that country, even as it seeks reliable sources of non-domestic pork,” the representatives said in the letter. “Consequently, our competitors in the EU as well as the Comprehensive and Progressive Trans-Pacific Partnership participants are well-positioned to take advantage of this tremendous opportunity given their free trade agreements with Vietnam.”

Vietnam has culled more than two million domestic pigs and imported hogs in the past two years because of African swine fever. Pork is the meat most Vietnamese rely on for daily protein.

The representatives said in the letter to Tai that “the past few years have been extraordinarily difficult for U.S. pork producers due to trade retaliation from top U.S. export destinations” as well as disruptions brought about by the coronavirus pandemic.

Vietnam’s Ministry of Foreign Affairs did not immediately respond to an emailed request for comment made outside regular business hours.