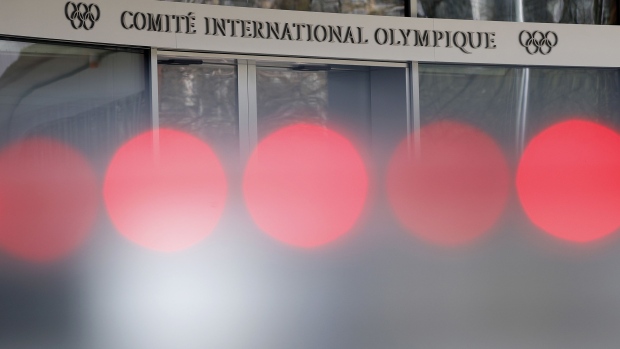 A sign is displayed above the entrance of the headquarters of the International Olympic Committee (IOC) in Lausanne, Switzerland, on Wednesday, March 25, 2020. The global economy’s most abrupt and consequential shock in at least a generation is unfolding at hubs of international commerce as the U.S. and Europe struggle to contain the coronavirus pandemic. Photographer: Stefan Wermuth/Bloomberg , Bloomberg

(Bloomberg) -- House lawmakers introduced a bipartisan bill that would strip the International Olympics Committee of its tax exemption status.

The legislation comes as multiple human rights organizations and prominent lawmakers push the IOC on China’s hosting of the Winter Olympics, set to be held next month. The U.S. recently announced a diplomatic boycott of the Beijing Games over concerns about human rights abuses.

“The IOC has made it crystal clear that it will prioritize profits over human rights, standing firmly on the side of the Chinese government to aid and abet the cover-up of the Uyghur genocide and other horrific human rights abuses ahead of next month’s Olympic Games,” Democratic Representative Jennifer Wexton said in a statement.