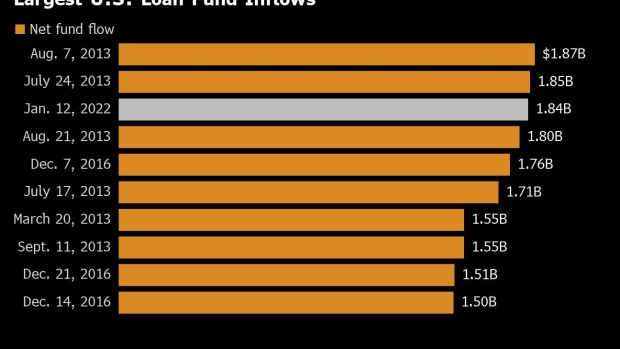 (Bloomberg) -- Funds that invest in U.S. leveraged loans posted the biggest inflow since August 2013 as investors rush to the asset class with the Federal Reserve ready to increase rates.

The funds pulled in about $1.84 billion of cash for the week ended Jan. 12, according Refinitiv Lipper data. That makes for the third-largest intake ever, the data show, and the highest since August 2013 amid a taper tantrum, when the Fed looked to end a bond-buying program it began in response to the global financial crisis.

Investors have been clamoring to buy the risky debt that has floating-rate interest payments, which can act as a hedge against rising rates and a shield from inflation. Traders are pricing in a Fed rate hike as soon as March, while the consumer price index jumped 7% in 2021, the largest 12-month gain in nearly four decades, according to Labor Department data released Wednesday.

Secondary prices on leveraged loans rose to 98.95 on Wednesday, the highest since July 2014, according to the S&P/LSTA Leveraged Loan Price Index, and investors are also snapping up corporate loan sales in the primary market.

Fertitta Entertainment Inc. increased the size of the loan portion of its $5.55 billion debt offering on this week while slashing the size of its junk-bond sale. Meanwhile, a bevy of household names has also come forward to tap into the heavy demand: Clogmaker Crocs Inc., orange juice producer Tropicana and cybersecurity software firm NortonLifeLock Inc. are among the nearly three dozen borrowers that have hit the leveraged loan market so far this year, according to data compiled by Bloomberg.

U.S. high-yield bond funds saw a $2.24 billion outflow while U.S. investment-grade bond funds registered an inflow of just over $1 billion, according to Lipper.