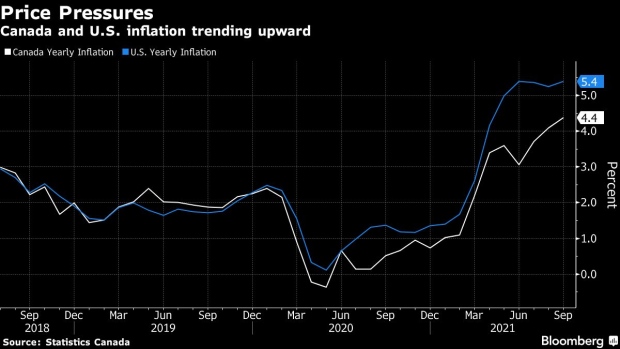 (Bloomberg) -- Growth data on both sides of the Atlantic in the coming week will reveal the impact of a multitude of headwinds that hit the U.S. during the third quarter and will soon come Europe’s way.

Buffeted by the delta variant, supply shortages and inflation, the world’s largest economy is projected by economists to have expanded by an annualized 2.8%, amid a sharp slowdown in spending by American consumers. That’s less than half the 6.7% gain of the previous three months.

A day after those U.S. figures are released on Thursday, euro-zone data are likely to show the region’s recovery holding pace from the prior period with a quarter-on-quarter increase in gross domestic product of 2.1%. The U.S. and euro-zone economies are at different stages of their recoveries, but encountering the same global turbulence.

In the U.S., social activity including travel and leisure once again faced disruptions from the coronavirus variant. While vaccinations and a fading of the delta impact suggest growth may pick up this quarter, supply chains remain in disarray and inflation pressures continue to build.

For the euro area, a summer of lockdown loosening probably heralded a surge in leisure spending, outweighing the effect of global supply bottlenecks on industry. Such disruption is likely to be more pronounced in the current quarter, though. Inflation, data on which is also due on Friday, will probably show a spike to 3.7% in October, the highest since 2008.

European Central Bank officials are gauging the strength of the recovery as they debate how to fashion future stimulus in the aftermath of the crisis, and they’ll share their view on growth and price pressures after a meeting on Thursday. That will provide a foretaste of their major decision on bond purchasing due in December.

“Investors will watch next week’s data carefully for any signs of stagflationary tendencies in the U.S. economy. That comes just before an FOMC meeting the following week that will almost certainly result in a formal announcement of a timeline to taper.”

Elsewhere, Brazil’s central bank may raise interest rates for a sixth straight meeting, the Bank of Canada is likely to further pare back quantitative easing, and the U.K. chancellor will outline his budget to Parliament.

Bank of Canada Governor Tiff Macklem appears set to pare back purchases of government bonds for a fourth time on Wednesday, to C$1 billion ($810 million) a week from the current pace of C$2 billion. New quarterly forecasts will likely include another upward revision of Canada’s inflation outlook. Yearly consumer price gains hit 4.4% in September, the highest since early 2003 and the sixth straight reading beyond the upper limit of Macklem’s control range.

Traders will also be scouring the rate statement and the governor’s remarks for any changes in forward guidance. Macklem has signaled the second half of next year as a likely liftoff point for the policy rate, which has been at an emergency low of 0.25% since March 2020, but markets now expect him to hike much sooner.

In the U.S., in addition to the government’s first estimate of third-quarter GDP, reports over the coming week include figures on income and spending, employment costs, durable goods orders, new-home sales and consumer confidence.

The Bank of Japan meets to decide on policy and its latest economic forecasts. People familiar with the matter expect the central bank to lower its growth forecast for this year and bump it up for next year, to reflect the summer Covid wave and supply-side constraints.

The meeting comes during the last few days of campaigning before voters go the polls, with Prime Minister Fumio Kishida expected to win.

South Korea’s latest growth figures are likely to show the economy limping through its virus wave but still on track for 4% annual growth and another interest rate hike.

Australia gets its latest inflation figures on Wednesday, with analysts expecting the RBA’s key gauge to remain below 2%.

Along with euro-zone growth data on Friday will be GDP reports from around the region, including Germany and the next three biggest economies. Other European countries from Sweden to the Czech Republic are also due to publish those statistics.

For a more up-to-date gauge, Germany’s Ifo index on Monday will reveal the impact of supply bottlenecks on factories in October. Economists anticipate a drop in the main measure to a six-month low.

In the U.K., the major event will be the budget on Wednesday, where Chancellor of Exchequer Rishi Sunak will lay out fiscal measures and publish new forecasts. The Treasury is resisting pressure to increase spending on concern that it might prompt more aggressive Bank of England tightening, according to an official.

Further afield, Egypt’s central bank is expected to hold its key interest rate at 8.25% on Thursday, as it seeks to maintain one of the world’s highest inflation-adjusted rates and keep its local debt attractive to foreign investors even if the Fed tapers.

On Thursday, Kavcioglu will update the bank’s base-case scenario for inflation through 2021 and the following two years, and will answer questions from economists and reporters in Ankara.

Data on Thursday is likely to show Zambian inflation slowed for a third straight month in October, while remaining at almost triple the 8% ceiling of the central bank’s target band.

On Friday, new Finance Minister Situmbeko Musokotwane is expected to provide guidance on how the recently-defaulted nation will reduce inflation, create jobs, and stabilize its finances as he presents the first budget under President Hakainde Hichilema’s two-month-old administration.

Brazil’s central bank expects that consumer prices peaked in September. The mid-October reading out Tuesday may show that annual inflation receding toward 10%, still well over the 3.75% target. On Wednesday, analysts are expecting that Brazilian unemployment fell for a fourth month in August.

At its two-day meeting ending Wednesday, Brazil’s central bank has signaled that it will raise the key rate for a sixth straight meeting and by 100bps to 7.25%, up from 2% as recently as March. Analysts see another full-point hike in December.

On Thursday, the broadest measure of Brazilian inflation for September may post a second straight monthly decline. Chile’s central bank posts the minutes of its Oct. 13 meeting where policy makers raised the key rate 125bps -- the biggest hike in two decades -- to 2.75%.

Friday’s preliminary report on Mexico’s third-quarter output is expected to show that the recovery slowed as global supply-snarls undercut output and exports. The economy remains below pre-pandemic levels.

In Chile, six major indicators for September are due, including retail sales, unemployment, and copper production.

Closing out the week, expect Colombia’s central bank to raise its key rate for a second straight meeting, by 25bps to 2.25%, and signal it will pursue slow steady tightening given recent underwhelming economic data.