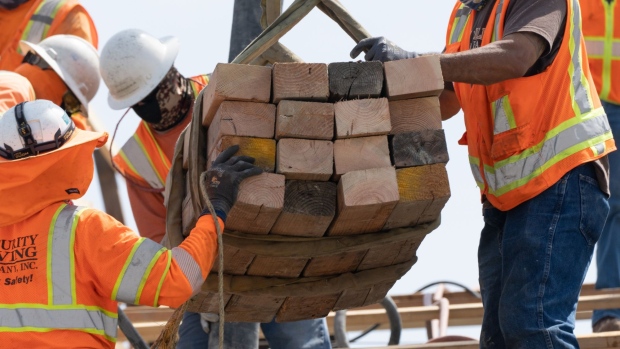 Skanska AB construction workers guide a load of lumber carried by a crane at the Sixth Street Viaduct replacement project in Los Angeles, California, U.S. on Tuesday, April 6, 2021. The Ribbon of Light is the name of the ten arches that will make up the new Sixth Street Viaduct connecting downtown L.A.'s Arts District with Boyle Heights. Photographer: Bing Guan/Bloomberg , Bloomberg

The frenzy comes on the heels of record American forest-products imports from Europe in 2020, when North American demand soared and caught sawmills off guard with low inventories. Lumber prices have reached new peaks on a near daily basis in recent weeks, quadrupling from just a year ago. The unprecedented rally has been spurred by low borrowing rates, an increased appetite for larger homes, and a frenzy of do-it-yourself renovations during the pandemic.

Unrelenting building demand means U.S. sawmills have been unable to catch up, causing suppliers to look to Europe for a reprieve as it is one of the few parts of the globe with a surplus due to a beetle infestation that killed large swaths of trees that must now be harvested. Voracious U.S. demand means beetle-killed wood in Europe could sell faster than expected, though international shipping and U.S. trucking constraints limit supply chain capabilities.

“The other markets are getting pulled up by the U.S.,” said Geoff Berwick, vice president of business development at Atlantic Forest Products.

Berwick has been importing lumber from Europe since 1999 and his job has never been easier, he said. Customers tell him: “Get me covered and let me know what it’s going to cost.” Normally, prices are negotiated.

The buying power of lumber importers in the U.S. is strengthened by home builders’ willingness to pay up, as project costs rise by the hour on some days. The cost of lumber for the average U.S. house has increased by nearly $36,000 over the last year, according to the National Association of Home Builders.

The U.S. continues to buy the biggest share of its foreign forest products from Canada, but imports from the European Union reached an all-time high in 2020, nearly tripling 2019’s amount. The biggest jump from European countries came from Sweden, which rose a dizzying 1,300%. Imports from Europe remained strong in the first three months of 2021, up 37% from the same period a year ago, USDA Foreign Agricultural Service data show.

“European producers will always look for the best markets. Right now that’s still the U.S.,” said Thomas Mende, chief executive officer of Binderholz Timber Inc. in Georgia, the U.S. branch of Binderholz GmbH in Austria. “The Chinese have been more aggressive and are willing to pay higher prices, so are the Indian buyers.”

These days when Binderholz has wood available, it’s often sold within a minutes, Mende said.

Even with “insane” Chinese demand for European lumber, the strength of U.S. buying is the largest factor supporting prices, said Hans-Joachim Hormel, the head of Baden-Wuerttemberg State Forest lumber sales in Germany. U.S. buyers have lower expectations for quality, so the damage and discolorations in lumber from beetle-infested forests make it ideal for export stateside, Hormel said.

BPWood, a lumber trading house based in one of the main North American producing regions of British Columbia, has increased its European imports tenfold compared to a typical month last fall, according to Chief Executive Officer Paul Bouchard.

Still, deliveries may come with a one- to two-month lag given robust demand in the U.S. “It’s a rowdy, rock ‘n’ roll surreal market right now,” Bouchard said.