I would hope they reduce the tariffs down to nothing: Leon's Furniture president

The price of U.S. lumber will fall further in the coming months as sawmills increase production, though demand is expected to hold strong, according to Capital Economics.

"High prevailing prices have already encouraged lumber mills to boost output and we anticipate that domestic production will rise even further as labor shortages in the trucking and forestry sector dissipate," Samuel Burman, assistant commodities economist, said in a note Wednesday.

The number of rail cars hauling lumber in North America rose above 7,000 for the first time in over two years in May and, "despite slipping back so far in June, they remain relatively high by past standards," Burman said. 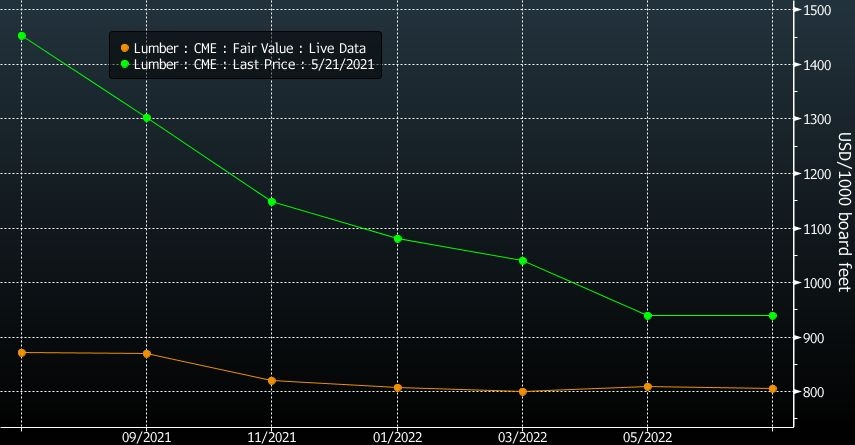 The most-active lumber futures contract on the Chicago Mercantile Exchange is almost 50 per cent below last month’s record high of US$1,733.50 per 1,000 board feet. Spurred sharply higher by strong home building and renovation demand, prices are still well above historical levels, at around US$900, more than double the cost just a year ago, when the rally began .

Capital Economics forecasts that lumber prices will drop to US$600 per 1,000 board feet by the end of 2021.

The forward curve on the futures market shows the premium of the nearby contract has dropped sharply over the last month, indicating falling demand for near-term delivery.

Roughly 3,000 U.S. mills are "all running extremely hard" and wood supplies are expected to catch up to demand throughout the summer months.

Winter storms in the first quarter of this year reduced supplies of resin, which is used to make oriented strand board, or OSB, a lower-costing stand-in for plywood that is widely used to make walls and floors in U.S. houses. That has led to a supply shortage and price rally in OSB.

"It’s even more difficult to get OSB at the moment than it is lumber," Flitman said.