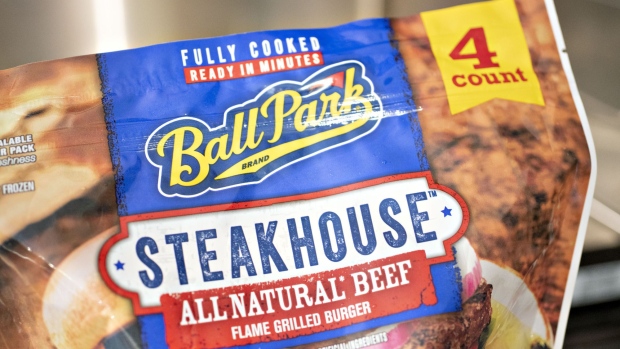 In shelter-in-place America, people have been filling their freezers full of meat just in case. Meanwhile, at the plants where the meat is packed, the big question is: What happens if the workers start getting sick?

The potential for a coronavirus-related disruption is raising difficult questions for those who track an industry that’s suddenly of critical importance to the nation’s well-being. Some warn that meat packers should prepare for the inevitable.

“I am extremely doubtful that we can get through the next few weeks without any packing plant Covid-19 disruptions,” said David Kruse, president of CommStock Investments in Royal, Iowa. He compared the situation to a hurricane making landfall that upends plant operations. “It will be a miracle if all plants run un-impacted.”

The idea of a sick worker arriving in a plant and infecting other workers is even pushing some in the industry, known to be particularly grueling, to alter longstanding policies. It’s a work environment where sick leave is rare and even bathroom breaks are considered a perk.

Tyson Foods Inc., the biggest U.S. meat processor, is still not offering paid sick days, but says it is “eliminating any punitive effect for missing work due to illness.” Perdue Farms, which does offer up to four weeks of paid time off for hourly plant workers, is encouraging its workers to visit its wellness centers, contact their doctors and use accrued time if they are ill. It said it is also reassessing policies to respond to the pandemic.

“It’s up to each company to determine appropriate employment packages, including leave policies, in compliance with all applicable laws,” said Tom Super, spokesperson for the National Chicken Council. “It’s in the company’s, and everyone’s, best interest to not have sick employees show up for work.”

Meat processors have struggled to find and keep workers in a tight labor market as U.S. unemployment figures have shrunk to historic lows. The jobs are physically demanding, highly repetitive and can be extremely dangerous, making them even harder to fill. In March, a contract worker at a Tyson plant in Alabama was decapitated while cleaning a piece of equipment.

The worker shortage has been exacerbated by the Trump Administration’s tougher stance on immigration, which has specifically impacted meatpacking. Plants have been the target of raids, since immigrants make up a significant percentage of the meat processing industry’s workforce.

An outbreak of illness at a plant could seriously reduce or even halt operations at the same time that demand has surged across the U.S. as shoppers stockpile essential goods.

At least for now, companies may be able to withstand fewer workers showing up, said Christine McCracken, an analyst at Rabobank. Some of the companies that are relaxing their policies are already seeing a 20% to 30% slowdown in their processing lines as employees stay home to recover from illness or take care of family members.

That isn’t translating into less poultry, however. Instead, the same amount is being produced, but with less processing and cutting in the process -- think whole birds and drumsticks instead of skinless breast fillets. This works out because it’s the kind of product that retailers, are looking for, while food-service operators that order more specialized cuts have seen their operations nosedive amid mandated closures.

For workers, however, the outlook isn’t so rosy if their company isn’t offering paid leave policies. Even days missed for on-the-job injuries are not typically paid in the industry, according to Debbie Berkowitz, the Worker Safety and Health program director at the National Employment Law Project. Instead, if a longer term absence is anticipated, workers will go through the Family Medical Leave Act, she said. This protects workers from being fired but is “often a disaster for families” because it means an extended period without pay.

Companies appear to be reviewing their calculations in light of coronavirus, however, since its highly contagious nature could cause a plant to lose a large swath of its workforce all at once.

“If someone comes in, many other people will be out sick,” said Stephen Morse, professor of epidemiology at Columbia University Medical Center. “The cost of giving generous sick leave is far less than the cost of many workers getting sick and not being able to contribute.”

Transmission at a meat packing plant, however, would be less likely than at, say, a crowded bar or restaurant, because food safety already demands protective gear and regular deep cleaning, said Andrew Novakovic, an agriculture economist at Cornell University.

“What companies are doing is saying: ‘Act differently when you go to lunch or the break room,’” he said. “That will be new, but actually the processing environment is likely to have a lot of protocols in place.”

Still, the risk is serious.

The labor side of slaughterhouses is “the real big immediate fear,” said Brian Philpot, CEO of AgAmerica, one of the largest non-bank agricultural lenders in the U.S. “You have people that work inside closed spaces and how is that going to impact them?”

Another factor that plant operators may take into account when relaxing attendance policies is the current glut of meat available, in part thanks to booming production. At 957.5 million pounds, there was more chicken in cold storage last January than any January on record. That could, of course, be tested by by a protein shortage in Asia as well as U.S. consumers sudden voracious appetite for proteins.

But for now the protein supply is holding up. “We have plenty of chicken,” McCracken of Rabobank said. “Nobody is going to go short.”