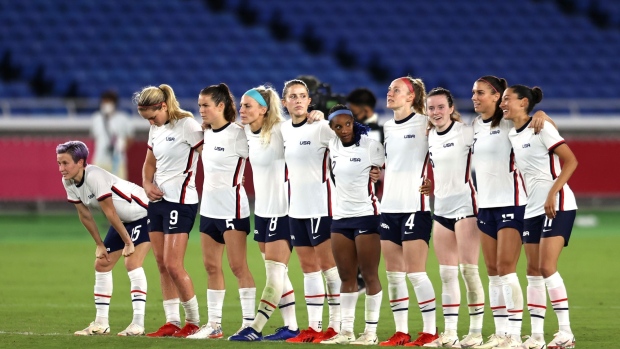 (Bloomberg) -- The labor organization for the U.S. men’s soccer team and the Equal Employment Opportunity Commission filed court papers supporting the legal fight by the women’s national team to earn equal pay.The U.S. National Soccer Team Players Association told a federal appeals court that it understands the long-standing discrimination against the women’s team, which has won four World Cup titles, more than any other nation. It also claimed a shared interest in the women’s lawsuit against the U.S. Soccer Federation that was dismissed by a federal judge last year.

“The men stand with the women in their fight to secure the equal pay they deserve,” the male players’ association said in a friend of the court brief filed Friday.

The U.S. women’s team sued in 2019 seeking equal and fair compensation for elite athletes, male and female. They said they are paid less than their male counterparts.

But a federal judge in Los Angeles tossed the suit after concluding they actually earned more than the men in 2017-2018 and that the pay discrepancy was due to differences the team negotiated in their collective bargaining agreements.

In April, the women appealed, saying they earned more because they played more games and were more successful.

The men’s players agreed, adding that the judge had used flawed math.

“The women only managed to get the same total per game pay by having extraordinary success on the field, while the years relied on by the district court were the first time the men did not qualify for the World Cup in more than thirty years,” according to their filing.

The U.S. Soccer Federation “is firmly committed to equal pay, just as the members of our senior national teams are,” Neil Buethe, the organization’s chief communications officer, said in an emailed statement. “We will continue working with both our Men’s and Women’s National Teams to equalize FIFA prize money and to chart a positive path forward to grow the game both here at home and around the world.”

In a separate friend of the court brief, the Equal Employment Opportunity Commission said the lower court judge wrongly concluded the women rejected proposals never offered to them, relied on “several legally irrelevant factors,” and improperly favored the federation’s evidence over that of the women’s team. The EEOC enforces employment-related anti-discrimination laws.The lawsuit gained widespread attention last year when Carlos Cordeiro, who was president of U.S. Soccer, abruptly resigned amid a furor over arguments in a federation legal filing that the women’s team is paid differently than the men’s team because its play is inferior and the competition worse, and it competes in less hostile stadiums.