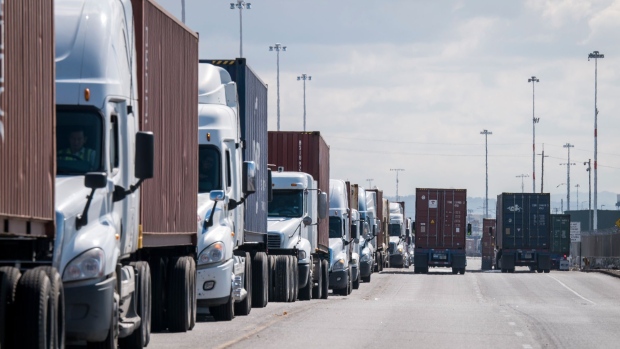 Trucks wait in line to enter the Port of Oakland in Oakland, California, U.S., on Thursday, March 19, 2020. The spread of the coronavirus pandemic is scrambling supply chains in everything from crude oil to copper and foodstuffs, with many countries reporting a shortage of containers. Photographer: David Paul Morris/Bloomberg , Bloomberg

U.S. merchandise trade in April slumped to the lowest level in a decade as the coronavirus pandemic curtailed demand and disrupted supply lines.

Goods exports plummeted 25.2 per cent in April from the prior month, the biggest decline in records back to 1989, to US$95.4 billion, according to Commerce Department data released Friday.

The goods-trade deficit widened to US$69.7 billion from a revised US$65 billion a month earlier. The median forecast in a Bloomberg survey of economists called for a US$65 billion gap.

The data indicate the second quarter got off to a weaker start as companies and consumers largely remained on lockdown. Analysts use these numbers to adjust estimates for quarterly economic growth.