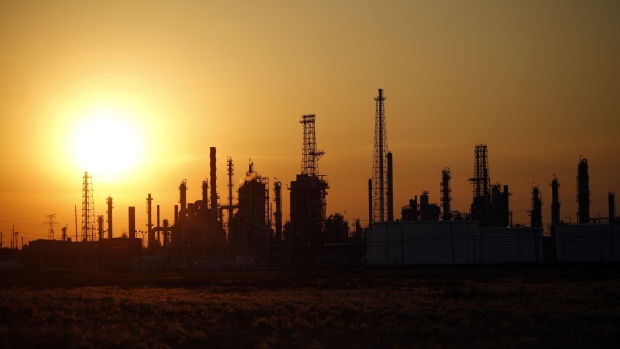 (Bloomberg) -- Refiners in the America’s heartland are starting to ramp up, which will be welcome news to struggling Canadian oil producers.

Heavy Western Canadian Select crude’s discount to U.S. benchmark futures shrank to $8 a barrel Wednesday, the narrowest in more than a year, NE2 Group pricing data show. Refineries in the Midwest, which take almost two-thirds of U.S. imports from Canada, boosted their crude use by almost 300,000 barrels a day last week, after slowing down for weeks due to a glut of fuel.

Refiners in the region increased rates as some states, including Ohio, prepared to relax stay-at-home orders and as farmers started spring planting, which requires diesel. The region is experiencing a “a fairly significant sharp increase in demand,” Valero Energy Corp.’s Gary Simmons, chief commercial officer, said on an earnings call today.

The Midwest market is coming back into balance after a “train wreck” of reduced demand, Husky Energy Inc. Chief Executive Rob Peabody said on a call. “On the refined products side, we’re seeing some glimmers of hope. It looks like we’ve got things pretty much in balance with moves the refiners have made.”

Canadian oil sands producers were initially hit hard by loss of demand from the Covid-19 pandemic due to their distance from U.S. buyers. Producers cut back, with Suncor Energy Inc. idling part of its Fort Hills mine, ConocoPhillips slashing rates at its Surmont site and Athabasca Oil Corp. entirely shutting down its Hangingstone oil-sands wells.