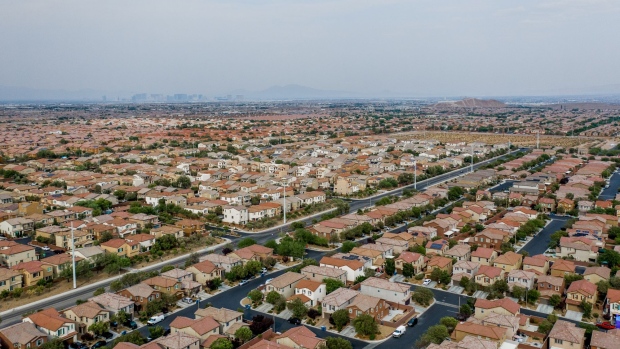 Homes in the Mountains Edge neighborhood are seen in this aerial photograph taken over Las Vegas, Nevada, U.S., on Friday, Sept. 18, 2020. Nowhere is the widening gap between real estate and the real economy more apparent than in Las Vegas, where tourism is in ruins, wages are plunging and home prices just keep rocketing higher. Photographer: Roger Kisby/Bloomberg , Bloomberg

(Bloomberg) -- U.S. mortgage rates fell to a record low for the 14th time this year.

The average for a 30-year, fixed loan dropped this week to 2.71%, the lowest in data going back to 1971, Freddie Mac said in a statement Thursday. The previous record, 2.72%, held for two weeks.

Rates have been tumbling since March, fueling a homebuying boom and enabling current owners to save money by refinancing into cheaper loans. That’s made real estate a bright spot in the economy while other sectors have struggled to gain traction amid the pandemic.

The Federal Reserve’s plan to hold its benchmark rate near zero should keep a lid on mortgage costs for the foreseeable future. Still, the intense demand for a tight supply of homes has driven up prices, shutting some would-be buyers out of the market and threatening to slow the momentum of the housing rally.

“While homebuyer appetite remains robust, the scarce inventory has effectively put a limit on how much higher sales can increase,” Sam Khater, Freddie Mac’s chief economist, said in the statement. “Unfortunately, the record low supply combined with strong demand means home prices are rapidly escalating and eroding the benefits of the low-mortgage-rate environment.”

In a sign of a slowdown, a measure of contracts to buy previously owned homes fell for a second straight month in October, the National Association of Realtors reported this week.