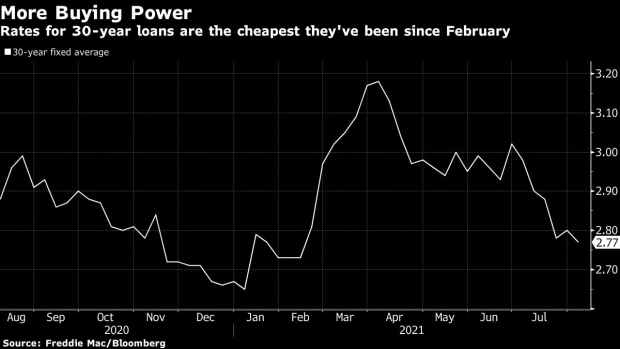 "Sold" signs in the windows of new townhomes in the Hunter's Crossing subdivision in Sumter, South Carolina, U.S., on Tuesday, July 6, 2021. U.S. pending home sales unexpectedly rose in May by the most in nearly a year as low borrowing costs paired with increased listings bolstered demand. Photographer: Micah Green/Bloomberg , Bloomberg

(Bloomberg) -- Mortgage rates in the U.S. dipped to the lowest level in almost six months.

The average for a 30-year loan was 2.77%, down from 2.8% last week and the lowest since Feb. 11, Freddie Mac said in a statement Thursday. Rates had previously dropped to the lowest level since early February on July 22.

Mortgage rates are tracking yields for the benchmark 10-year Treasuries, which slid to the lowest level since February earlier this week.

Rates have been below 3% for six weeks, inching closer to the record low of 2.65% reached in January. Cheaper borrowing costs have underpinned the pandemic housing rally.