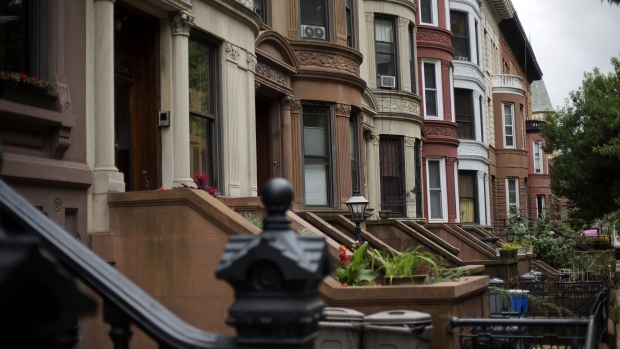 Brownstone buildings line a street of the Bedford-Stuyvesant neighborhood in the Brooklyn borough of New York. , Photographer: Victor J. Blue/Bloomberg

Mortgage rates are searching for the floor.

The average for a 30-year fixed loan fell to 2.98 per cent, slipping below a psychological threshold that could fuel even more demand for housing.

Rates dropped to the lowest level in almost 50 years of record-keeping by Freddie Mac for the third straight week and the seventh time since the coronavirus outbreak began roiling financial markets that. The tumble came as the Federal Reserve holds its benchmark rate near zero and buys mortgage bonds as part of its plan to stimulate the economy.

The low rates have propped up home prices and helped the housing market hold up better than expected amid the economic fallout from the pandemic.

“It’s not a silver bullet for the economic woes we’re experiencing, but it’s night-and-day different than what the housing market was looking like during the last recession,” said Ralph McLaughlin, chief economist for Haus, a co-investment platform for homebuyers.

The lower borrowing costs have drawn a flood of applications for refinancing and new purchase loans as a wave of millennials age into homeownership.

The dip below three per cent could prompt even more Americans to apply for loans, according to Mark Vitner, senior economist at Wells Fargo Securities.

“It’s psychologically important,” he said. “For folks who aren’t aware mortgage rates are low, this should set off alarm bells.”

In May, when the Federal Reserve started buying lower-coupon mortgage securities, analysts predicted that rates could drop below three per cent. Now, there’s speculation that the slide could continue.

“We’ve been very consistent that mortgages, believe it or not, are far more costly than they should be,” Dimon said on a conference call.

Despite the demand driven by low rates, risks abound in the housing market. With credit standards tightening amid high unemployment and fears that the economic recovery is stalling, some potential buyers won’t qualify for debt or could struggle to find homes in their price range.

In addition, the pandemic is peaking in much of the country with a second wave expected this fall. And Congress may not extend the US$600-a-week boost to unemployment benefits that’s set to end this month.

That could hamper what has been a relatively strong housing market, McLaughlin said.

“Ultimately, the course of the virus is going to dictate the course of housing market and the economy,” he said. “Housing is not going to be immune to a double-dip recession.”