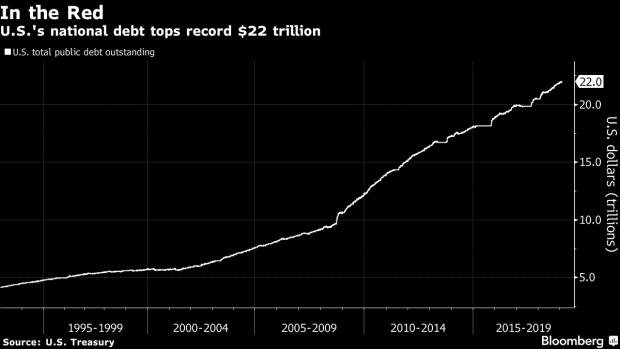 The U.S. Capitol building is reflected in a pool in Washington, D.C. Photographer: Al Drago/Bloomberg , Bloomberg

(Bloomberg) -- The U.S.’s financial burden is growing despite a strong economy. Total public debt climbed to more than $22 trillion as of Feb. 11, according to a Treasury Department report Tuesday. The country’s obligations are mounting as President Donald Trump debates members of Congress over funds for a wall along the southern border and fiscal experts including former Federal Reserve Chair Alan Greenspan warn about the dangers of rising budget deficits.

To contact the editor responsible for this story: Sophie Caronello at scaronello@bloomberg.net