Ukraine in Talks to Purchase US LNG, Naftogaz CEO Says

U.S. natural gas prices tumbled after a fire broke out at a Texas export terminal, threatening to leave supplies of the fuel stranded in shale basins despite surging overseas demand.

The fire is under control at Freeport LNG’s terminal in Quintana, Texas, about 65 miles (105 kilometers) south of Houston, company spokeswoman Heather Browne said Wednesday. The incident happened at about 11:40 a.m. local time and an investigation is ongoing, she said, adding that there were no injuries or risks to the surrounding community.

Freeport is one of seven US liquefied natural gas export terminals, which receive gas via pipeline and liquefy it before loading the super-chilled LNG onto tankers. The terminals have helped the US emerge in the past few years to vie with Qatar and Australia for position as the No. 1 exporter of LNG. As Europe clamors for cargoes after Russia’s invasion of Ukraine, the blaze could have a significant impact on global supplies of the fuel.

US natural gas futures for July delivery slid as much as 9.3 per cent to US$8.427 per million British thermal units in New York after reports of the fire first emerged, halting a rally that sent prices to fresh 13-year highs earlier. The contract settled down 6.4 per cent at US$8.699. Prices have more than doubled this year, as US gas stockpiles remain well below normal levels. 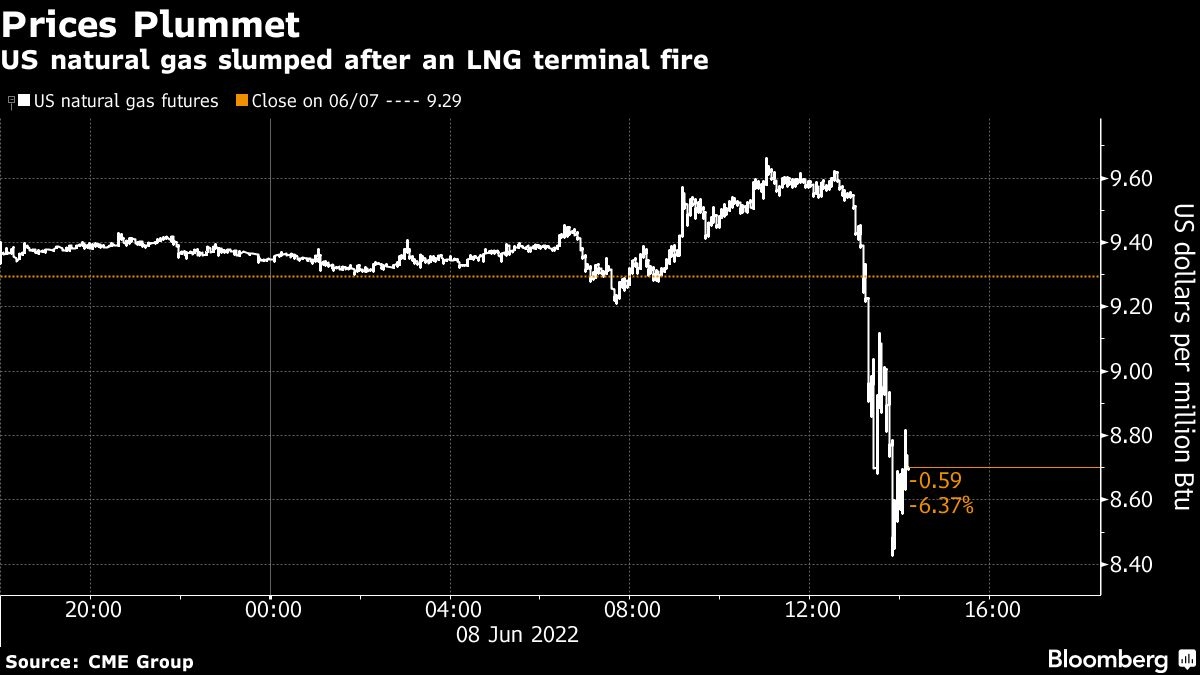 The fire is “going to curtail exports and alleviate some of the strain on US supplies,” said John Kilduff, a partner at hedge fund Again Capital in New York. US consumers “should benefit from lower prices, but Europe and Asia will probably pay higher prices.”

Freeport receives about 2 billion cubic feet of gas per day, or roughly 16 per cent of total US LNG export capacity. The tanker Elisa Larus is currently at the terminal, though it’s under way using its engine, according to vessel tracking data compiled by Bloomberg. That suggests the tanker may be moving away from Freeport.