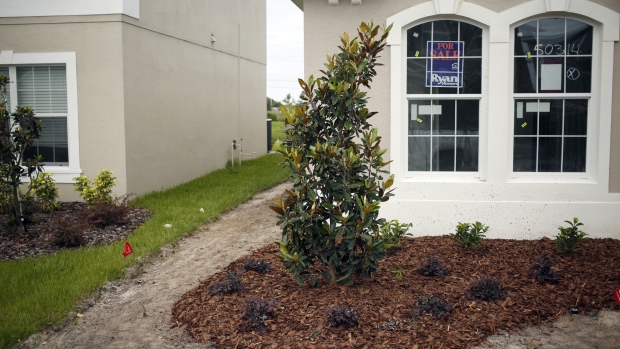 A "For Sale" sign is displayed in the window of a new house at a Ryan Homes Inc. development in Gibsonton, Florida, U.S., on Thursday, May 24, 2018. Home prices in 20 U.S. cities climbed more than forecast in March, driven by rising demand and a lack of inventory, according to S&P CoreLogic Case-Shiller data released Tuesday. , Bloomberg

U.S. purchases of new homes fell in June to the slowest pace in eight months, while the median selling price declined to the lowest in more than a year, adding to signs the housing market is cooling, according to government data Wednesday.

Demand weakened in three of four U.S. regions, including a 7.7 per cent drop in the South, the largest area. The decline in sales left 301,000 homes available nationwide in June, the most since March 2009.

The decrease in the median price reflected a bigger share of homes sold in the US$200,000 to US$300,000 range and a smaller share above that level. That suggests demand remains steady at lower price points amid a strong job market and fairly elevated confidence, while buyers may be reluctant to commit to more expensive properties.

One encouraging sign for the economy was that the number of properties sold in which construction hadn’t yet started rose to a four-month high, a sign builders will stay busy in coming months. A rising pipeline indicates residential construction will continue to boost growth.

New-home sales, tabulated when contracts get signed, account for about 10 per cent of the market. They're considered a timelier barometer than purchases of previously owned homes, which are calculated when contracts close and are reported by the National Association of Realtors. Existing home sales fell in June for the third straight month, according to data earlier this week.