Pullback in housing market won't happen for at least another year: Realosophy president

Sales of new U.S. homes dropped unexpectedly in May as elevated home prices continue to weigh on affordability and builders rush to replenish inventory.

Purchases of new single-family homes fell 5.9 per cent to a 769,000 annualized pace after an downwardly revised 817,000 in April, government data showed Wednesday. The median estimate in a Bloomberg survey of economists called for a 865,000 rate.

Shipping bottlenecks and higher input prices have held back homebuilding, contributing to skyrocketing prices for the limited supply of homes available. A silver lining of the report was data showing new-housing inventory continued to increase, though about a third of those homes have yet to be built. 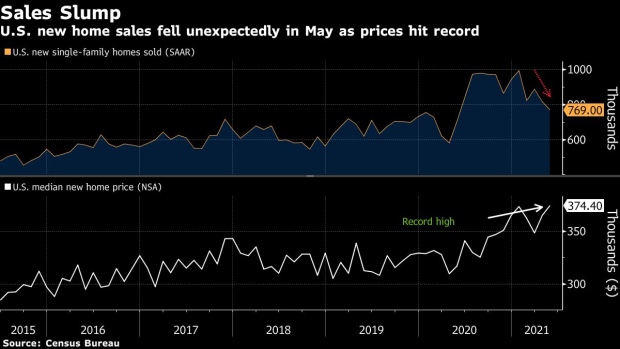 Homebuilder stocks slipped following the report. An S&P index of 16 homebuilders dropped as much as 2.5 per cent on the data, its biggest intraday decline in two weeks.

Ian Shepherdson at Pantheon Macroeconomics said the sales drop might be a sign that demand in the suburbs has fallen as COVID-19 fears have faded, going so far as calling the end of the boom. By contrast, Stephen Stanley at Amherst Pierpont Securities calls it “mostly an anomaly.”

“Aside from surging home prices squeezing some potential buyers out of the market, I do not have a good explanation for the latest fall,” Stanley wrote. “Anecdotally, we know that demand for homes remains robust, so I am pretty sure this is not an indication of a softening market.”

There were 330,000 new homes for sale in May, the most since July 2019. At the current sales pace, it would take 5.1 months to exhaust the supply of new homes, compared with 4.6 months in the prior month.

The median sales price rose to a record US$374,400. Mortgage applications have fallen sharply since January, suggesting that demand for homes is slowing.

A separate report Tuesday showed that existing home sales fell for a fourth straight month in May, held back by lack of inventory and record-high prices.