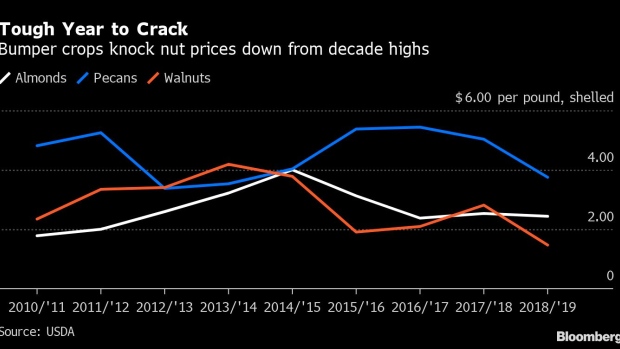 In a way, you could blame the keto-crazed, paleo-passionate dieters that made almonds and walnuts their go-to snack. The past decade’s demand boom sparked farmers to bring on the supply. They planted loads of new trees in the past several years. Groves take time to mature enough to bear fruit. Now, all that crop expansion is finally coming to market, but it’s arriving just as Chinese tariffs and fallout from the pandemic are dragging down exports.

Take the case of Bill Carriere, a fourth-generation farmer and owner of the Carriere Family Farms in California. His trees are so ripe with walnuts that his team is pruning the ends of burdened branches so the limbs don’t break.

“It’s been five years since the last trees were planted, and now that production is hitting, and the young trees are coming on board,” said Carriere. “It’s going to be a big crop, and that will be true for the next few years.”

The U.S. is the world’s largest producer and shipper of tree nuts like almonds, walnuts and pecans. More than half of the crop is typically exported, so the $9.5 billion industry hinges on international trade. That’s being undercut even as global appetite grows for the healthy snacks. For almonds, America’s biggest nut crop, export prices are down about 25% from a year ago, according to estimates from Rabobank International. Other varieties have seen similar declines.

This year’s American almond crop is forecast to climb 20% to a record 3 billion pounds, data from the U.S. Department of Agriculture show. California is the primary commercial producer and accounts for about 80% of the global harvest. Increased acreage, advanced technology and ideal weather conditions have propelled supply higher, according to Richard Waycott, president and chief executive officer of Almond Board of California.

Judy Hirigoyen, the vice president of global marketing at American Pistachio Growers, sees production near an all-time high of 1 billion pounds. Prices for U.S. pistachio growers could drop to about $2.30 to $2.40 a pound this season from $2.60 in 2019, according to David Magana, senior horticultural analyst for Rabobank.

The Asian country is typically one of the primary destinations for American exports. But in recent years, China has tried to move toward self-sufficiency by growing more of its own crops. So export demand was already starting to wane, but things escalated amid the trade spat. Beijing slapped tariffs as high as 75% on U.S. shipments.

In its annual outlook report, the USDA forecast almond exports were set to reach a three-year low in the 2019-2020 season, and walnut shipments were also expected to decline. Those estimates were published in October.

Coronavirus hit China in January and February, upending the nation’s Lunar New Year holiday, which is when a large bulk of imports typically occurs. Nuts are often given in gift packages as part of the celebrations. A February USDA report on pistachios showed poor demand for this year’s holiday would help spur an almost 15% drop in shipments.

Other than marketing, the nut industry has little recourse to adjust supply and demand. Trees are permanent crops that take years to mature to become productive, and growers can’t scale down their acres quickly to adjust.

Carriere, the California walnut grower, already has more trees on the way after placing an order more than a year ago. The saplings have been growing in a nursery, and his farm has also already made deposits for still more trees to arrive in February 2022.