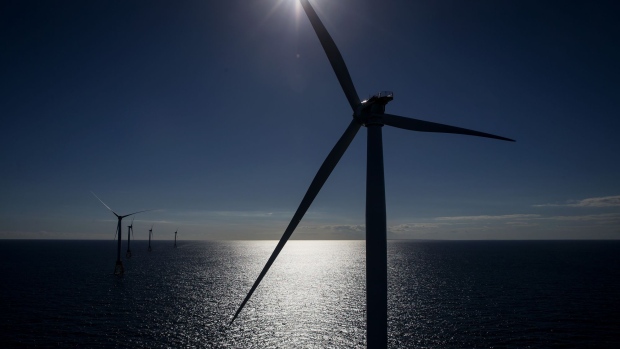 (Bloomberg) -- The plan to rapidly scale up wind farms off the U.S. coast is set to miss President Joe Biden’s 2030 goal by 30%, according to research from IHS Markit Ltd.

Earlier this year, the Biden administration announced a goal to deploy 30 gigawatts of offshore wind, enough to power more than 10 million American homes, by the end of the decade. It’s a key part of a broader plan to eliminate greenhouse gas emissions from the nation’s power grid by 2035.

While the administration has helped to accelerate permitting for the first wave of wind farms in the Atlantic Ocean, supply-chain bottlenecks will likely limit construction to about 21 gigawatts by 2030, according to IHS Markit.

The U.S., which has yet to build a large-scale project, is looking to close the gap on Europe, which already has more than 20 gigawatts of offshore wind farms. In the meantime, developers will need to rely on Europe for manufacturing capacity and the highly specialized ships that install the massive wind turbines.

Despite a gradual start, growth could accelerate as the American industry matures.

“As more and more offshore wind farms in the U.S. are consented, equipment manufacturers will be more willing to invest and build local supply chains and new installation vessels,” said Andrei Utkin, an analyst at IHS Markit. “But it will be a gradual process as the industry needs to see a rich pipeline of consented projects and a clear regulatory framework before committing to invest billions of dollars in local factories.”

Already, investments are being made to upgrade ports and start manufacturing to grow the industry. That could help unleash a surge of offshore wind capacity beyond 2030. Analysts at BloombergNEF expect capacity to reach as much as 49.8 gigawatts by 2035, with about half of that installed after 2030.